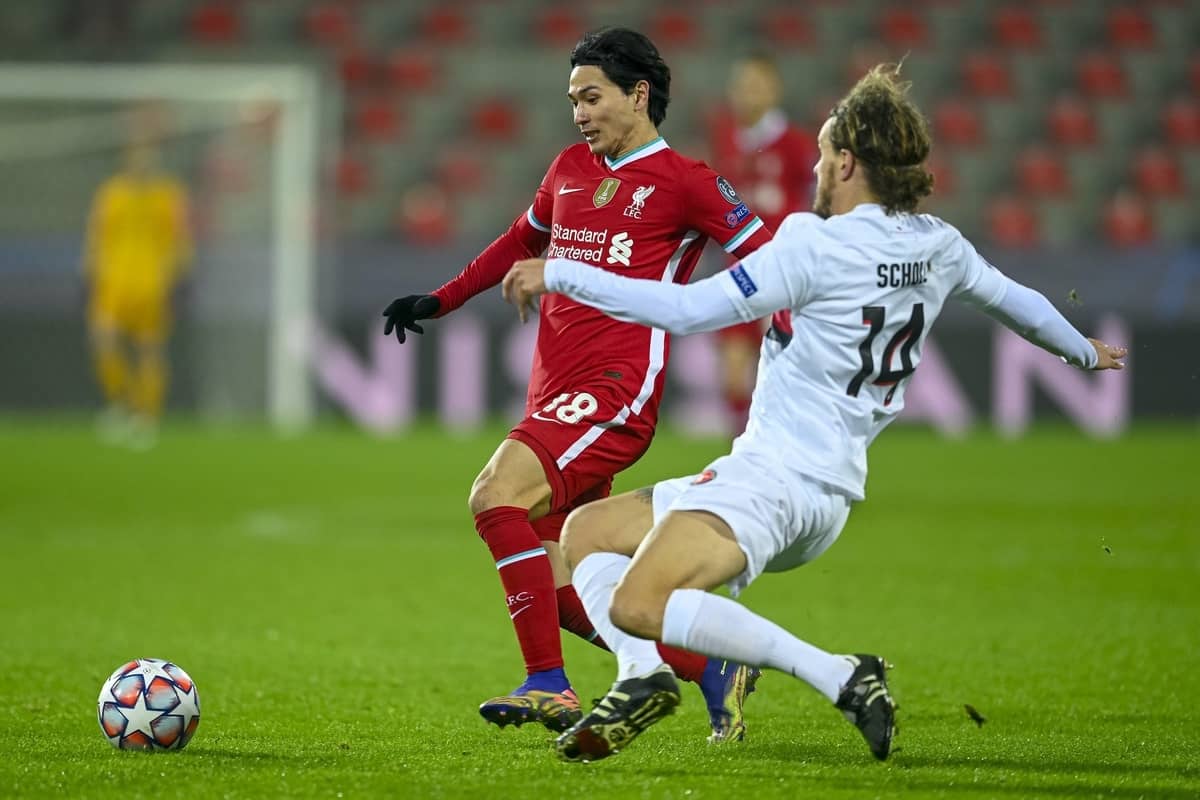 Takumi Minamino broke Liverpool‘s pressing record for the campaign so far with a performance against Midtjylland that convinced Jurgen Klopp of his midfield potential.

Minamino has been pushed from pillar to post in his first year with the Reds, with the No. 18 nearing 12 months since the deal to bring him to Anfield was confirmed.

“He is is a type of player we need,” Klopp explained soon after.

“He can play all offensive positions which is good. Maybe can play as an eight as well.”

In his first half-season, the Japanese largely operated on the wing, while this term has seen him shifted to a centre-forward duty to fill in for Roberto Firmino.

Most recently, first against Brighton and then on Wednesday night at Midtjylland, Minamino has been trialled as a No. 8 in midfield – and at the MCH Arena, Klopp explained that he was “much better.”

Upon returning to Kirkby the following day, Klopp likely will have been even more impressed by the 25-year-old’s output, as he broke the record for one of the most important metrics.

According to FBref, Minamino made 37 attempted pressures, which is the most of any Liverpool player so far this season.

Of these, 28 were in the midfield, five in defence and four in the final – though it should be noted that he was only successful with nine in total, or 24.3 percent.

However, his nine successful pressures were still the most produced on the night, and is higher than the per-90 average of any of Minamino’s team-mates in 2020/21, lifting his own to 8.82 per 90.

It highlights his persistence in a new role in midfield, serving as Liverpool‘s pressing trigger in the absence of Firmino, keeping the pressure on Midtjylland high up the pitch as he regularly pushed forward into attack.

There is strong competition for places in the middle of the park, with Jordan Henderson, Gini Wijnaldum and Curtis Jones arguably the first-choice starters at present and Naby Keita and Alex Oxlade-Chamberlain now returning.

But Minamino’s performance against Midtjylland suggested he is capable of fulfiling the requirements if Klopp plumps for a different option in a campaign that will continue to demand rotation in almost every game.

Based on this record-breaking display, Minamino’s ability to not only play in midfield but also out wide and up front could increase the chance of more game time between now and the end of May.