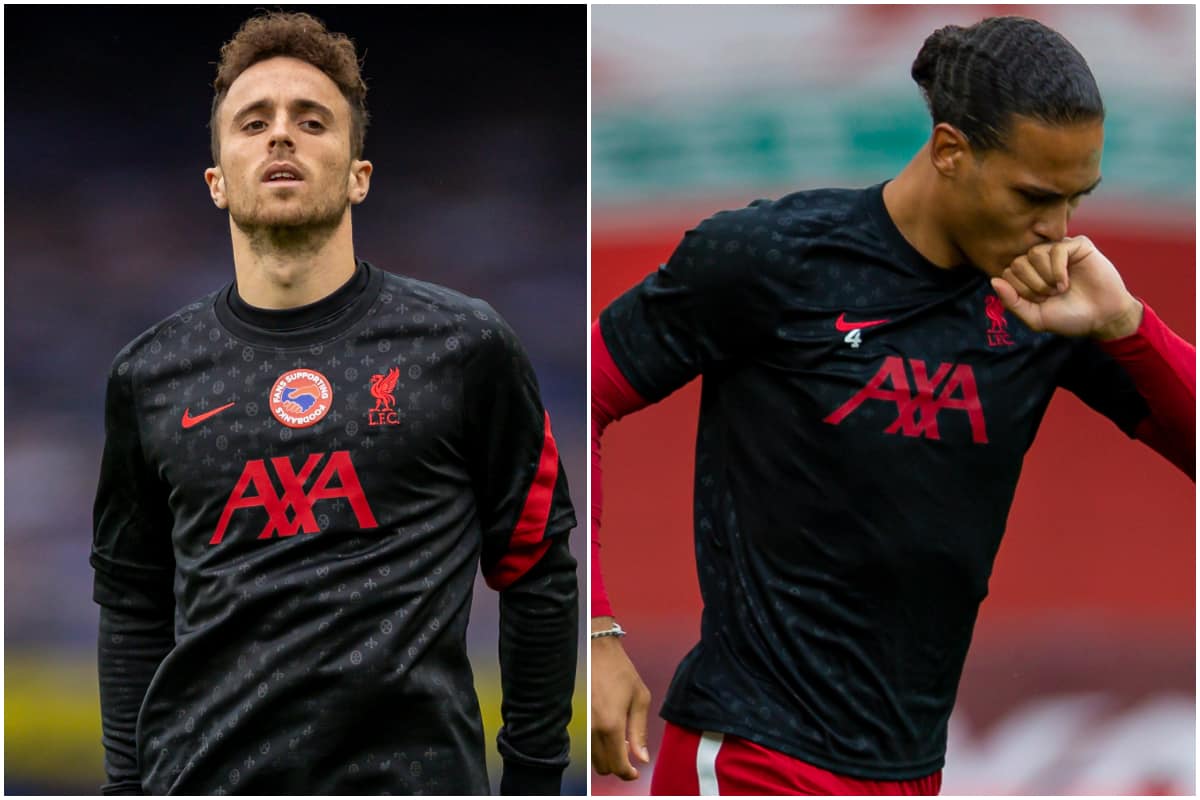 Diogo Jota is back in full training and Virgil van Dijk is back working on the outdoor pitches at Kirkby, in a rare positive injury update for Liverpool this season.

It has not been a morale-boosting campaign for the Reds so far, with injury after injury hampering results and effectively ending their title defence by February.

Jordan Henderson is the latest to be sidelined, with it claimed he was heard saying “you’re joking” after slumping to the turf during the Merseyside derby, which sums the situation up perfectly.

However, Liverpool were able to provide an uplifting message on Wednesday, with the news that Jota is now back training with the first-team squad:

The Portuguese could make the bench against Sheffield United on Sunday and is more than likely to be involved against Chelsea next Thursday night, which is timely given Roberto Firmino‘s struggles of late.

Jota was not the only welcome sight at Kirkby, with Van Dijk also pictured in individual work outside, including light training with a ball:

? @VirgilvDijk continuing to work his way back to full fitness. pic.twitter.com/1HGSJK6RZq

Unsurprisingly, this was met with overwhelming positivity from supporters on social media.

Diogo Jota back in training? pic.twitter.com/1xC6v51Ond

Diogo Jota being back is fantastic, not least because maybe it means Sadio Mané can have a rest without having to rely on Divock Origi.

Although it most likely means he could take Firmino’s place, which isn’t bad at the minute.

With Jota back in training, I’d like to see this when he’s fully fit. pic.twitter.com/rFX3rZ8Pvb

As was the sight of Van Dijk on the grass…

Me waking up to see van dijk back on the grass and jota and keita pictures in training pic.twitter.com/AzVBbYzxxF

Though cautionary tales were told on expectatons for Jota…

Do you think Jota knows he's supposed to turn things around on his own or…?

All I'm saying is don't lay all your hopes on Jota. First Ox, then Thiago and Kabak a month later. Players returning doesn't necessarily mean things will get better.https://t.co/lzYg83XmqI

Remember when we were excited to see Ox back training? https://t.co/VVHdz2vdOy

LFC posting Jota content to make us happy before they break the Hendo news ?

Posting Jota pics to soften the blow about Hendo perhaps

Hendo out as soon as Jota is back, sums our season up ? https://t.co/WDqn0wZ6J5

With Virg and Jota pictures you just know Hendo is out for the season pic.twitter.com/DuCyxyCb77