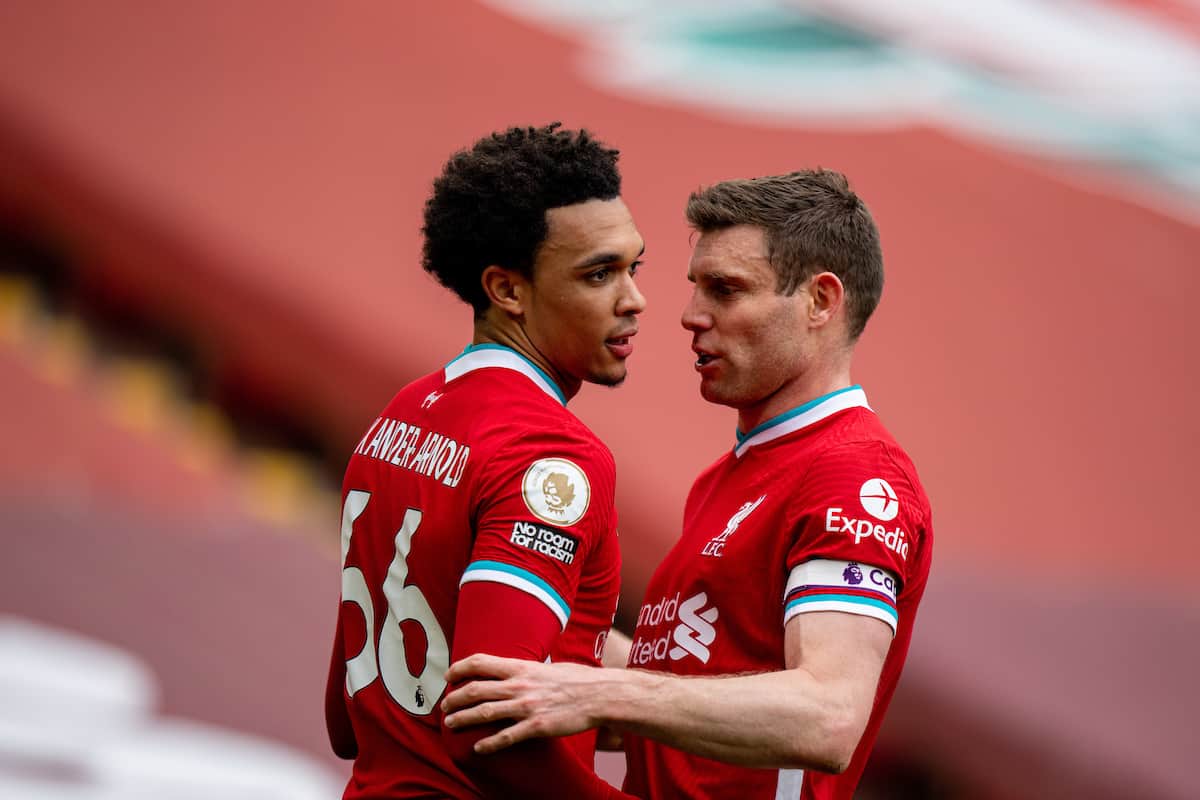 Trent Alexander-Arnold has not been short on support after injury forced him out of England’s squad for the Euros, just eight days before the competition kicked off.

You couldn’t write the happenings surrounding the No. 66 after months of debate as to whether he should or should not be called into Gareth Southgate’s squad.

The former would win out as Southgate saw sense, with Trent to join three other right-backs in the 26-man squad.

But a grade two quad tear has stopped him in his tracks to force his early exit from the Three Lions after pulling up in the dying stages of the win over Austria on Wednesday evening.

The 22-year-old needed assistance off the field and now faces a recovery time of four to six weeks, the latter of which aligns with the start of Liverpool’s pre-season on July 12.

It’s a massive blow and one that swiftly saw the Reds’ captain and vice-captain send their well wishes and show support.

“Gutted for Trent, but he’ll be back. Lots of tournaments ahead of him,” Henderson penned on his Instagram.

And a similar message came from James Milner, who wrote, “Keep your head up mate. You will come back stronger and you have a lot of tournaments ahead of you.”

At a time of great personal disappointment, they’re words that will come as some degree of comfort from two players who experienced a myriad of highs and lows throughout their careers.

But at 22, he does have a lot of football ahead of him and there will be plenty more chances for Trent to represent his country on the biggest stage.

And there were plenty of Reds who were gutted on his behalf, but they too looked for the silver lining:

Devo'ed for Trent, always horrible when the best players are robbed of their chance to shine on the big stages.

He's young though, loads more Euros in his future.

Hopefully he comes back fully powered up and ready to batter the Premier League! pic.twitter.com/9mNoMKZGHA

Gutted doesn’t begin to cover it. Yes Trent’s first half of the season wasn’t up to his standards but he’s worked so hard since the March internationals, been superb, deservedly got into the squad and then this happens. This is about a mental recovery as much as physical https://t.co/MvJVPWhoGR

Gutted for Trent, but all this means is he’ll be going into the new season with a fire in his belly

Absolutely gutted for Trent.
Made a hell of an impact after he was dropped the first time.
Superb talent, I’m sure he’ll get more chances in the future

Gutted for Trent but I’m absolutely made up for us. He gets a well-deserved rest and will be back for pre-season. ?? https://t.co/aR6m8YO3lt

Gutted for Trent only because how badly he wanted to be a part of it. A few weeks off will do him good. MUCH NEEDED rest. It's been years since he's been continuously giving his 100%.

For now, the focus will be on rehab and taking a well-deserved break after continuous football for the last few years and there’s no doubt we’ll see a fit and fighting Trent next season.