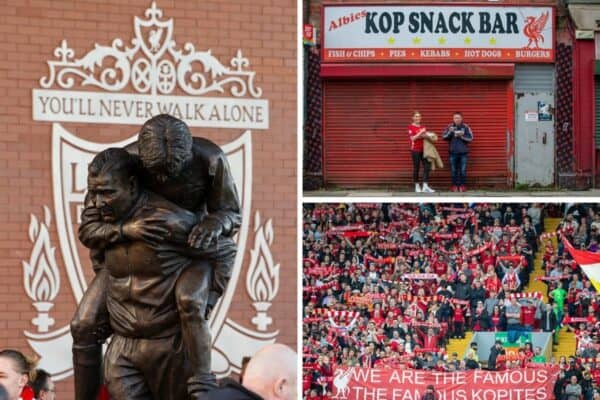 “You can feel the atmosphere!” – The Voice of Anfield’s advice as 529-day wait ends

Any trip to Anfield is a memorable one and after 529 days without a full crowd it’ll be that and more. And we got the number one piece of advice from George Sephton, the Voice of Anfield, when it comes to visiting Liverpool’s spiritual home.

Throughout the years Anfield and the surrounding area has changed drastically, from a new main stand and club shop to a larger concourse and vast pre-game entertainment.

It has and always will be the spiritual home of Liverpool Football Club; from our formation in 1892 to present day, Anfield has seen it all.

And it’ll now be able to welcome back more than 50,000 Reds as the familiar buzz of matchday returns after more than 17 months, where the opportunity to explore and reacquaint one’s self with Anfield will be cherished by many.

Whether it is a Reds’ first or 1000th game, the feeling of walking both around and inside Anfield never grows old, a place to fully immerse yourself and forget life outside of football.

But what is the number one piece of advice for a fan, perhaps visiting Anfield for the first time?

Well, This Is Anfield spoke to George Sephton, widely known as the ‘Voice of Anfield’ last year to find out exactly that – and it’s all about soaking up as much as the atmosphere as possible.

“Get there early. It sounds odd but there’s so much to take in nowadays. They’ve got musicians around the ground, in the family park and just the atmosphere in the pubs and clubs all around,” George told This Is Anfield.

“I miss all that now because for some reason I have to get in there very very early nowadays and I miss the buzz and the build-up.

“There’s so much to see. Obviously, they still do stadium tours on a matchday, although they are slightly shorter because you can’t go in the dressing room with all the players’ kits. But the tour of the building is great.

“But I always say one thing, if you are not remotely interested in football it’s still worth going to Liverpool and taking the stadium tour.

“It’s such a wonderful piece of architecture. If you are going to Anfield for the first time it’s stunning, people watch football on the TV and I say you’ve not got a clue what it’s like actually being there until you get in.

“You can feel the atmosphere, the noise, it’s something to behold.”

George has been Liverpool’s stadium announcer since 1971, 11 years after experiencing his first game at Anfield and he has witnessed the transformation of the ground firsthand.

“I know when the new stadium was officially opened which was September 2016, for one day I got turned into a VIP. I was invited to the official launch so I sat in the stand with all these ex-players and the mayor listening to the speeches from Tom Werner, Jurgen and John Henry,” he continued.

“Then we went on a proper tour and when we got to the top floor there is one corner where you can look out to the district of Anfield and the whole of the city and the surroundings of the ground.

“I ended up standing between John Henry and Ann O’Byrne, who was deputy mayor at the time, responsible for regeneration, and I just looked at them both and said ‘Thank you. Just thank you for what you have done here’.

“When I started coming to Anfield it was a slum, the stadium was getting on but the area was dreadful and it was falling to bits. Now you look out and there’s all these new houses, hotels and what used to be a tiny little club shop is now a superstore, which is fantastic.

“The stadium is wonderful, the way it’s laid out and what they’ve done to the district is just amazing. I’m so pleased with the way it’s turned out.

“People go on about the Americans and I think they’re wonderful, considering where we would have been had we still had the previous owners in place, I just can’t bear to think what would be going on by now.

“They would have flattened Anfield and built a new Anfield and I didn’t want them to do that, I wanted them to do what they’ve done which is treat it as the monument it is and build on it.”

READ MORE: Liverpool have issued guidance for fans ahead of the match to help avoid NFC pass issues seen in pre-season