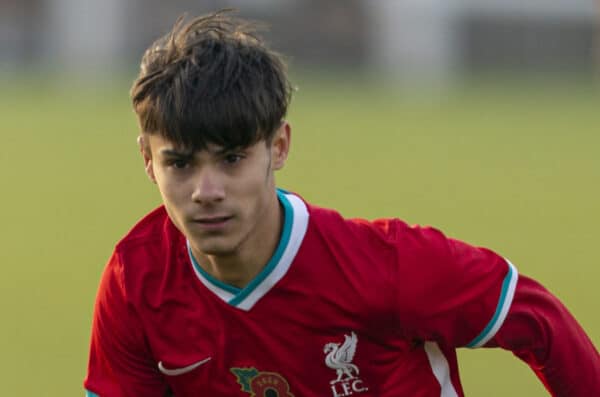 A last-minute Oakley Cannonier goal rescued a point for Liverpool under-18s in a dramatic draw with Nottingham Forest, with 16-year-old Bobby Clark marking his competitive debut at the level with a goal.

After three weeks without competitive action, Liverpool’s under-18s were swiftly required to be switched on as the first half saw five goals and two early substitutions.

Marc Bridge-Wilkinson named a young XI for the trip to Forest, with summer arrival Bobby Clark, formerly of Newcastle, making his competitive debut for the club.

The home side looked the more likely in the opening stages before Terence Miles supplied a well-directed cross to the back post for James McConnell to finish with a diving header for 1-0.

Flashes of danger would follow for the Forest defence thanks to Miles, but just 22 minutes after Liverpool’s opener the Reds found themselves behind as Esapa Osong proved a menace.

Shrugging the Reds’ defence aside and forcing them off their feet, the No. 9 finished in both corners beyond a hapless Harvey Davies, with Hammond then capitalising on another poor defensive setup from a corner to make it 3-1.

Forest’s final two goals of the half would come after both left-back Gyimah and goalscorer McConnell were forced off with blows to the head, forcing Bridge-Wilkinson’s hand to make changes.

It led to 10 minutes of stoppage time and Clark marked his debut at the level with a goal to keep the Reds in it, having capitalised on a poor defensive header with an instinctive finish.

The start of the second half would be subject to a delay of more than an hour after McConnell was taken to hospital as a precaution for his heavy clash, with the ambulance needing to return before the restart.

The Reds started strong in their pursuit of an equaliser, with Forest ‘keeper Bott asked questions by both Melkamu Frauendorf and Harvey Blair as Liverpool peppered his goal.

The in-form Oakley Cannonier injected further attacking impetus as Liverpool assumed control of the game, and after Forest went down to 10-men, he salvaged a point with his sixth goal of the season in the final minute.