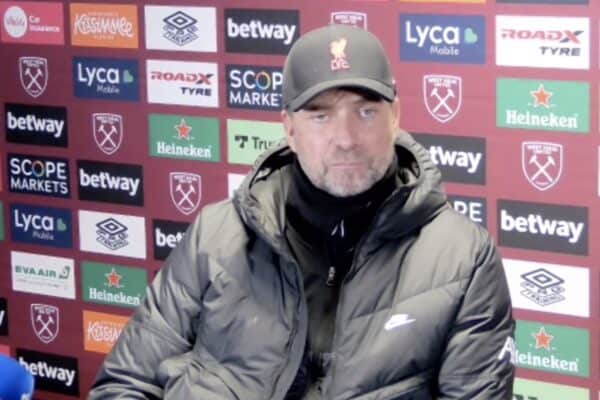 Was it a foul or was it not on Alisson? Either way, it was a key talking point for Jurgen Klopp as too was the red card debate after the 3-2 loss to West Ham.

The composure and control that defined this Liverpool team was not on show on Sunday, with West Ham capitalising on critical errors and what the boss cited as a lack of patience.

While Liverpool dominated the ball, the control was not there and it cost the Reds dearly.

“But that all shouldn’t have happened because we should have controlled the game in the second half, and for whatever reason it looked like we lost patience.

“Like we didn’t have enough clear cut chances so we wanted to change the wrong things, our passing changed too early, we had to do that high up the pitch so we were better protected.”

2. A foul on Alisson

The first incident and talking point of the match came inside just four minutes with Alisson credited with an own goal after being unable to clear the corner.

The Brazilian was adamant he was impeded and Klopp was of a similar view and discussed the over-reliance of VAR in situations such as those.

“I think it’s a clear foul on Alisson, how can it not be? The arm from Ogbonna is there,” Klopp said.

“I don’t know who was VAR today and we always have to say in the game maybe the ref can’t see that but when you see the dynamic of the whole situation, they’re in each other – how can that not be a foul already?

“But the ref made it easier for himself and thought, ‘c’mon let’s see what the VAR is seeing’ and VAR had a look and said not clear and obvious. I don’t know why.”

The second debate centred around Aaron Cresswell and his reckless challenge on Jordan Henderson, which many viewed as a red card.

Craig Pawson failed to award a foul and VAR waved the challenge on, much to the bemusement of Liverpool fans and the manager.

“I only saw the situation with Aaron and Hendo now and the way I saw it, it’s a clear red card.

“There’s actually no discussion possible and it will probably be because he touched the ball before.

“You cannot go like this into a challenge. We cannot make these decisions, and the ref I don’t know what he would say about that now.”