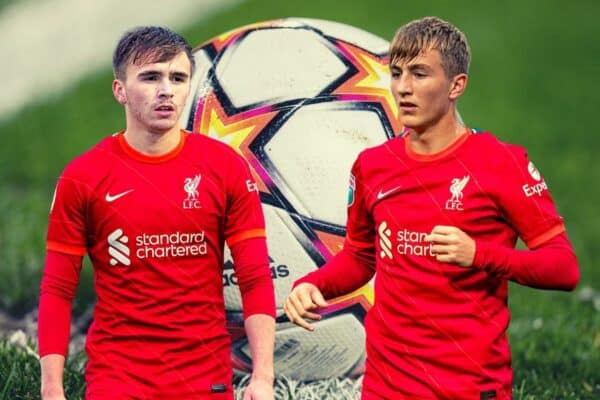 Who are James Norris & Max Woltman? The 2 new faces in Liverpool’s squad

When the Reds released their teamsheet at 6.41pm on Tuesday night, there were a number of surprises as Klopp made eight changes to his side for the Group B closer.

With top spot already wrapped up, the manager made necessary alterations, though Alisson, Mohamed Salah and Sadio Mane all kept their places.

The likes of Nat Phillips, Neco Williams and Takumi Minamino were afforded valuable game time, while 19-year-old Tyler Morton made his second start in the Champions League.

Perhaps most interesting was the inclusion of five youngsters from the academy on the substitutes’ bench, including more familiar faces in Conor Bradley, Elijah Dixon-Bonner and Harvey Davies.

Alongside them were two lesser-known talents, so who are Norris and Woltman?

Though he is still only 18, Norris has long been a fixture of Liverpool’s academy sides, and this season has been a regular for Barry Lewtas‘ under-23s.

Signed with Liverpool since under-9s level, Norris is a natural left-back, but more recently has found a place in midfield, with his boundless energy and fierce aggression making him a valuable asset.

On the left flank, the Scouser’s delivery is exceptional, while he capped a Man of the Match performance in the under-19s’ recent 4-0 win over Porto with a well-earned goal.

This is not Norris’ first taste of first-team action, as not only has he trained with the senior squad on a number of occasions, but he also came off the bench in the 5-0 loss to Aston Villa in the League Cup in 2019.

In doing so, he technically became the club’s fourth-youngest ever debutant, though it came in an academy side led by Neil Critchley.

There will have been a great pride at Greenleas JFC when the team news was announced, as not only did former player Morton start against Milan, but his close friend and long-time team-mate Woltman also made the squad.

From the Wirral, Woltman joined the Reds as a seven-year-old, signing terms along with Morton and another Greenleas talent, full-back Sean Wilson, and has established himself as a key fixture in the youth setup.

After stepping into the shoes of Layton Stewart last season with the under-18s, Woltman has taken up duties as the under-23s’ first-choice striker this term, with his creativity and work ethic making him a key player.

Like Norris, Woltman has already experienced life among the first team on the training ground, though has not been involved on a matchday.