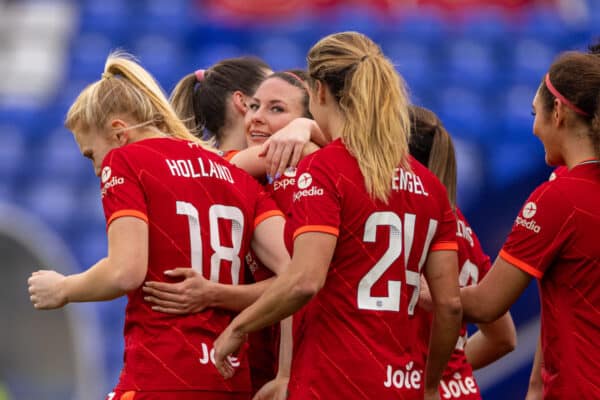 Liverpool Women go from strength to strength in their bid to return to the Super League having opened a seven-point gap on their closest rivals with nine games remaining.

Under the tutelage of Matt Beard, the Reds have developed a clear style and harmony in their play with their defensive superiority matched by an attacking flair.

No other team in the Championship has a better goals for or goals against tally than Liverpool, who remain with just a single defeat to their name in the league, and that was on opening day.

Over the last month, Liverpool have conceded just once and have scored a combined 17 goals in just five games.

It has been a month of highs for the Reds following on from a month-long break over Christmas, with a single low coming in the defeat to Tottenham that knocked Liverpool out of contention for the League Cup.

Nevertheless, it has been all guns blazing in the Championship and the FA Cup, with Blackburn, Watford, Crystal Palace and Lincoln City all failing to find the key to unlock this Liverpool side.

The month started with a bang as Irish striker Leanne Kiernan scored a hat-trick in the space of just seven minutes at Blackburn, and by month’s end, her tally stands at 11 goals in 16 appearances.

Not to be outdone, defender Leighanne Robe would then bring an end to her four-year wait for a Liverpool goal by netting three times in 21 minutes against Lincoln – talk about them all coming at once!

The 1-0 win at Watford showcased another side of the Reds, a patient and resilient one as they had to wait until the 83rd minute to find the winner after all but dominating the entire 90 minutes.

In a league with little error for margin, it is this resolve from Beard’s side that will prove instrumental in ensuring they sit in the sole promotion spot in May.

With impressive contributions across the board, including the likes of Taylor Hinds, new arrival Katie Stengel, Missy Bo Kearns and Rachael Laws – clean sheet maestro – there is plenty of momentum to stay ahead of London City.

One to watch: Katie Stengel

The 28-year-old forward was added to the squad at the start of January, providing another finisher to the ranks at a crucial juncture of the season.

Stengel’s debut came in the 6-0 rout at Blackburn and immediately showed the instincts that made the No. 24 the right fit for the team, before then clinching the winner against Watford.

Another goal against Crystal Palace would follow and then again against Lincoln in the cup, making for a valuable and instant start to life as a Red.

The action continues with three all-important league games, the first two of which are against sides in the bottom third of the table while the last is against second-placed London City.

Liverpool are currently seven points ahead of London City, who have a game in hand, and a win on the road against their closest rivals will be hugely significant in the promotion push.

But before that contest, Beard’s side can test themselves against current Super League leaders Arsenal when they meet in the FA Cup fifth round later in the month. A decisive month ahead!