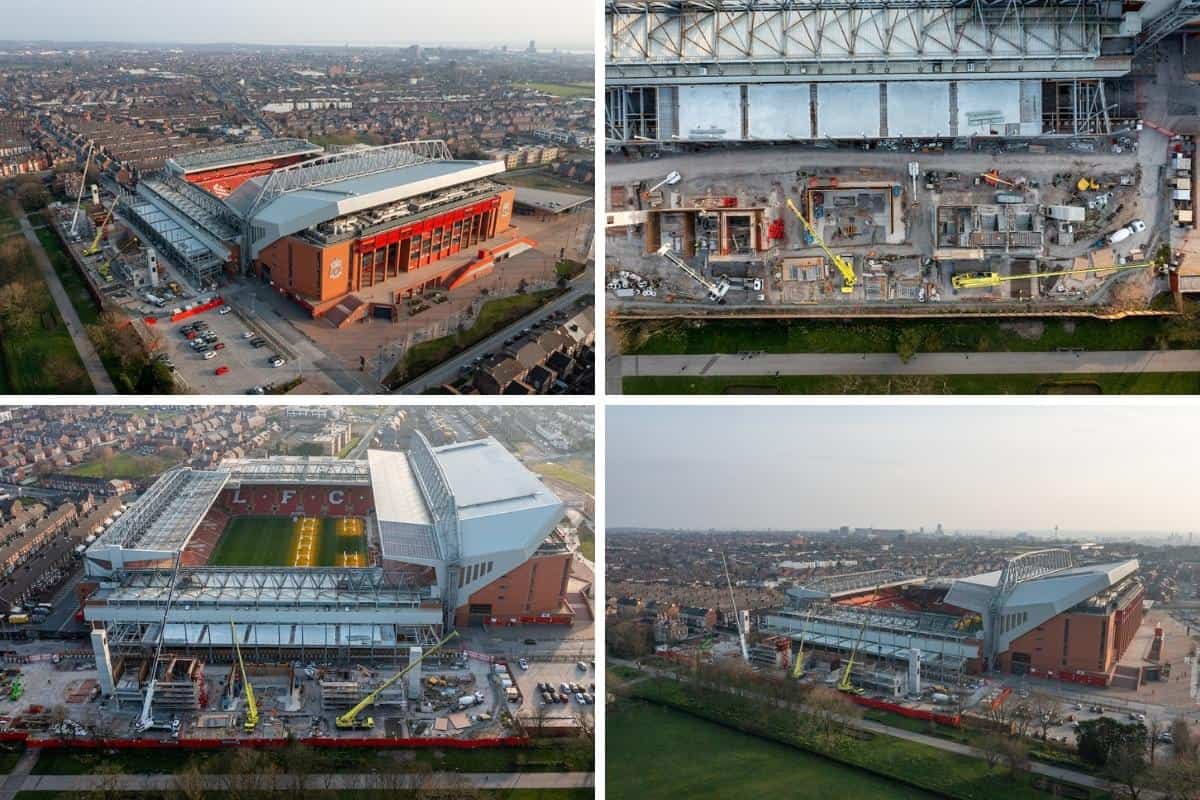 Liverpool’s continued work to add 7,000 seats to the Anfield Road End, along with major improvements to the interior and exterior, is beginning to show results.

The Anfield Road End redevelopment officially hit the six-month mark earlier in March, with construction company the Buckingham Group confirming the project is “on target” for a 2023 completion.

While the most notable features will be put in place this summer, before accelerating over the course of 2022/23, the process is moving swiftly as Liverpool add 7,000 seats to the stand.

At a cost of around £80 million, the redevelopment will increase Anfield’s capacity to 61,015, making it the fourth-largest stadium in the Premier League. 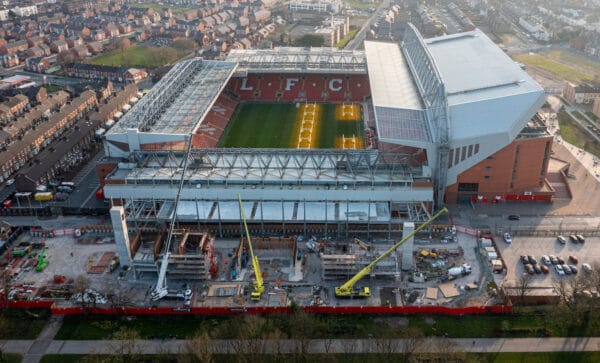 The Anfield Road End itself, situated opposite the Kop, will house 15,967 supporters, with its design similar to that of the already expanded Main Stand. 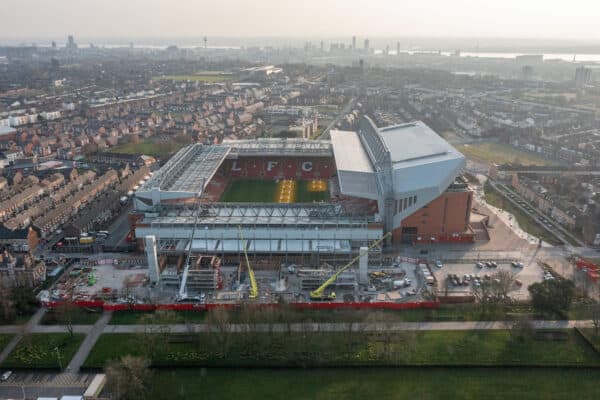 With good weather and amid a period of no home games in three-and-a-half weeks, strong progress is expected to be made ahead of the clash with Watford on April 2. 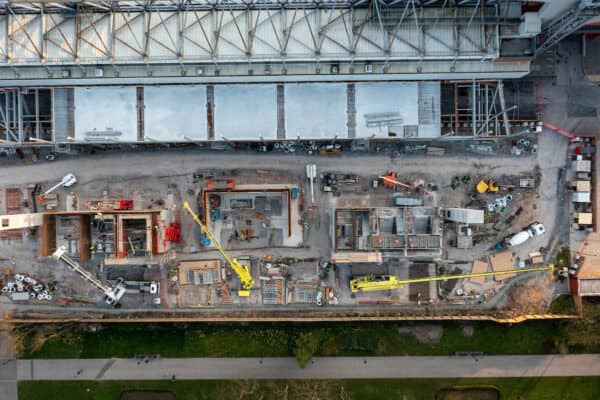 Foundation work and drainage is completed, with the erection of the steel framework up next – allowing supporters to get a better impression of the scale of the new Anfield Road End. 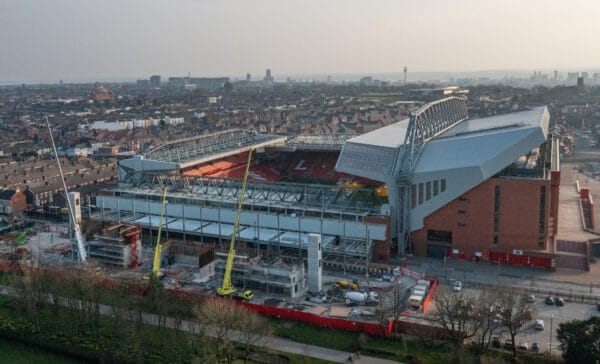 There is to be no disruption to matchdays at Anfield, with the building for the new upper tier being built outside the existing stand before being joined on. 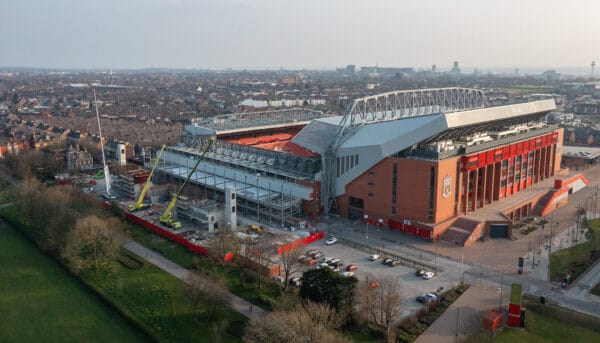 Along with the expansion of the Anfield Road End, substantial work is taking place to improve the concourse both inside and outside of the new stand, reflecting that of the impressive Main Stand. 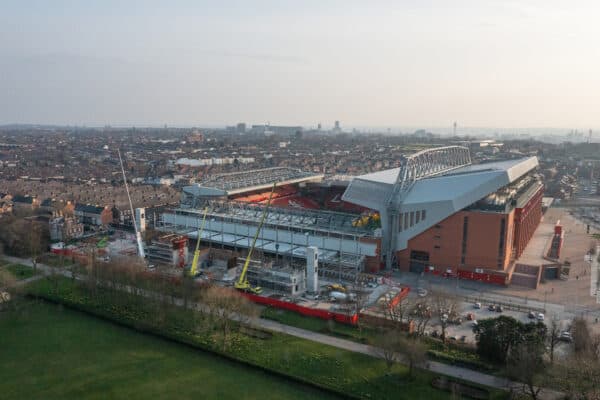 Supporters are being given a chance to have their names etched into the Anfield Forever walkway, which will join the area that runs alongside the Main Stand leading past the Hillsborough Memorial and towards the club shop. 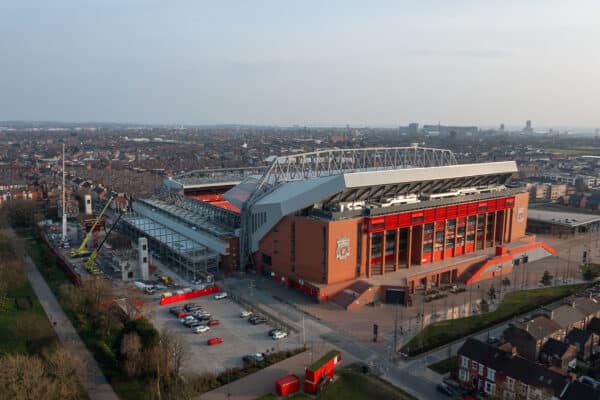 Redevelopment work on the Anfield Road End has risen from a cost of £60 million to £80 million, with the extra 7,000 seats expected to be divided 5:2 between general admission and hospitality. 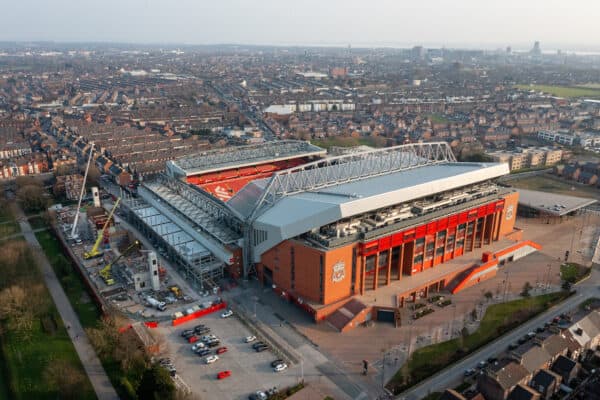 The club do not expect to require a delay on home games for the start of the 2023/24 season, as was the case with the Main Stand in 2016.

That campaign is currently set to be Jurgen Klopp‘s last with the club.