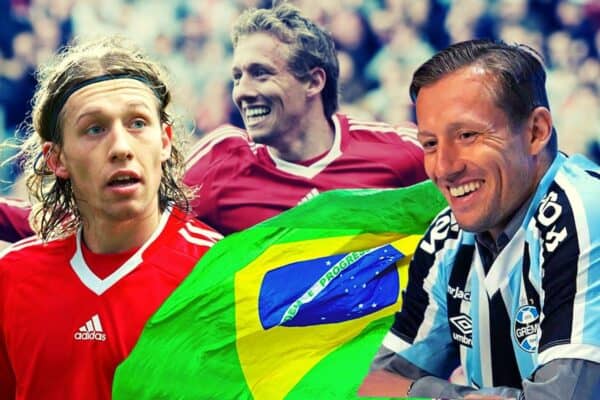 Lucas Leiva: From Gremio to Liverpool and back again – the story of a cult hero

After a 15-year sojourn in Europe through Liverpool and Lazio, Lucas Leiva has returned home to where it all began with Brazilian club Gremio.

The 35-year-old caps a long and often underrated spell in Europe where he became a reliable and committed cult hero for both the Reds at Anfield and with I Biancocelesti at the Stadio Olimpico – his home for the past five seasons following his departure from Liverpool, which ended a 10-year stay on Merseyside.

Lucas arrived at Liverpool as a fresh-faced, scraggly-haired 20-year-old with plenty of hype and expectation. Billed as an attacking, box-to-box player, many expected Lucas to slot into a midfield role and be the key to unlocking defences and scoring plenty of goals in the process.

It was a major coup for Liverpool at the time, signing an up-and-coming Brazilian star who could play immediately thanks to his Italian ancestry.

And his form in 2006 for the Brazilian side meant that he was by no means under the radar. Gremio had just won the Campeonato Gaucho – the league held for clubs in the Rio Grande do Sul region – and finished an impressive third overall in the Campeonato Brasileiro Serie A – Brazil’s premier division of football – behind only Sao Paulo and Internacional, Gremio’s closest rivals in the Gaucho.

Lucas had enjoyed an impressive season for Gremio that year, playing an integral role in their success – starting over 50 games and earning plaudits in Brazil and further afield as a star in the making with his energetic midfield performances.

Although he lacked the mind-boggling skill and trickery of stereotypical Brazilian players, he was more akin to a British type of player with a more combative style of play, with his boundless energy and fitness making up for his lack of deceptive footballing ability.

No rainbow flicks or rabonas, more sound execution of the basics and fundamentals.

This all earned him a huge honour in Brazilian football circles by winning Placar magazine’s Bola de Oura, the award given to the best player in the Campeonato, becoming the youngest player to do so at the time.

He followed a star-studded list of predecessors, including Carlos Tevez the year prior, Kaka, Romario, Zico and, of course, Pele.

The Dourados-born player was also coming to Anfield with international pedigree. The Brazil U20 captain at the time, he lifted the 2007 South American Championship alongside the likes of Willian and Alexandre Pato, scoring four goals along the way – including the opener in the final against Colombia.

Following his transfer to Liverpool in May, Lucas was expected to lead Brazil to the U20 World Cup in Canada that summer, but injury sidelined him from the tournament, which was won by a Sergio Aguero-inspired Argentina.

Rafa Benitez glowed about Lucas’ arrival on Merseyside, which felt like a major coup for the club at the time, beating interest from the likes of Inter and AC Milan to his signature. It had been a busy transfer window for the club, with Fernando Torres and Ryan Babel also joining to much anticipation.

Ultimately, Lucas would outlast all of the new arrivals that summer, overcoming a lot of negativity and criticism throughout his career at Anfield, more so than most would have experienced before.

The great misconception, which undoubtedly didn’t help Lucas following his arrival from Brazil, was that he was a goalscoring midfielder.

It perhaps didn’t help expectation that, in his introductory interview, Benitez said that Lucas would score a lot of goals for Liverpool, and as time went on and Lucas began to break into the side it became evident pretty quickly that he wasn’t necessarily that type of player.

This put Lucas into the firing line for a lot of criticism in the early years of his time at the club.

The first goal in his debut season – a 25-yard cracker against Havant & Waterlooville – was the sole strike in a campaign that spanned over 30 games.

As fans expected goals, Lucas struggled with the attacking component of the game and tended to step deeper into a more natural holding role that would eventually become his pedigree for club and country.

It took the Brazilian quite a bit of time to adjust to the Premier League, as Benitez batted away criticism of the player in the first two seasons of his time in England.

Some lacklustre performances in his second season at the club didn’t help, following selection at the 2008 Olympics where he returned with a third-place bronze medal, and he often became a scapegoat for the team’s struggling performances.

A major turning point came for Lucas when he was evidently booed following a draw at home to Fulham. A rarity at Anfield, as fans vented their frustrations at a club player, Lucas later described it as his “worst moment” in football.

Two seasons later and Lucas would completely turn that around, being awarded the club’s Player of the Year and earning a new long-term contract.

As Benitez transitioned into Roy Hodgson, Kenny Dalglish and then Brendan Rodgers, Lucas was a consistent key to the side, particularly in the successful Rodgers years when Liverpool were contending for the league title.

Lucas was always atop the key metrics for a player in his position, winning more tackles and making more passes than anyone else in the league. Although it was underappreciated donkey work, it did allow that team to flourish in attacking areas.

Jurgen Klopp, too, was appreciative of what Lucas offered and the Brazilian captained the side at times under his tenure, earning his 300th appearance for the club in 2016, before marking 10 years at the club a season later and leaving for Italian side Lazio.

There, he continued his cult hero status with five years of steady performances and impeccably high standards, winning another Player of the Season award in his first year in Rome.

As he circles back around to where it all began, Lucas Leiva may never be truly appreciated for his time at Anfield, and the leadership and quality he showed during periods that are oft-forgotten and much-maligned now looking back.

Few players have shaken off boos from the home faithful to go on and spend 10 years at a club and leave a cult hero with plenty of fantastic memories and excellent performances to take away.

In many ways, he returns to Gremio much how he departed 15 years ago. A reliable player whose attributes may never blow anyone away, but were integral to teams along the way as he overcame his limitations to provide vital, underappreciated work ethic and leadership.

Now 35, he reportedly turned down better offers to return home to Gremio, who are now operating in Brazil’s Serie B division, which sums up the character succinctly.

The scraggly kid paved the way for the now long line of incredible Brazilians that have contributed to the club – and is one who will always be welcomed back, to plenty of well-earned applause this time.