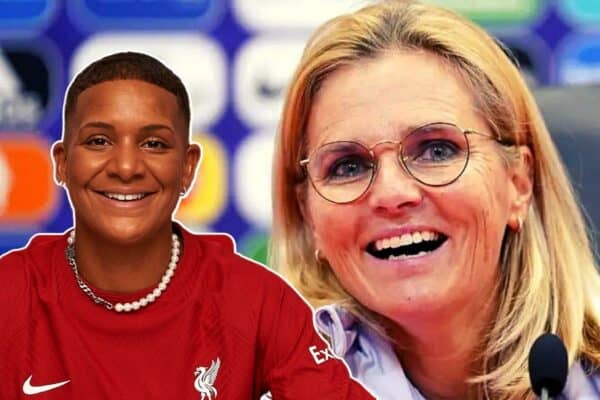 Sarina Wiegman’s England side has inspired the next generation on their way to the Women’s Euro 2022 final, and Liverpool’s Shanice van de Sanden knows just what the Lionesses’ boss is capable of.

The Women’s European Championships in England have made for a captivating journey on the way to the final, which the Lionesses and Germany will contest on Sunday (5pm BST).

For the young girls and aspiring football players in this country, it’s a sight they will never forget, with the next generation to grow up knowing what is possible.

Further investment is needed but the Euros have showcased the power of visibility and representation that the women’s game has, inspiring young girls at home and in the stadiums.

England is on the cusp of history having never won the Euros, and Liverpool forward Van de Sanden, who has first-hand experience of Wiegman’s management style with the Netherlands national team, is eager to see her former manager lift the trophy.

“It was really nice to work with her, I really love her as a person and a coach,” Van de Sanden told This Is Anfield. “She just gets the best out of you and she’s not always the easy one, but you don’t need that.

“You need a nice coach but she also needs to be hard for you, it’s the same for the coach over here.

“I think the England girls just needed some discipline and she really brings that into you, into the team, and in the staff as well.

“I think that’s the key at the moment, she knows what she wants and she brings that over to the team and they just follow her mindset. The girls just believe in it and I think that’s very important.

“Of course, you don’t know every single game who needs to come on but if you prepare your team like that, then you don’t have any issues during a tournament, you just focus on the good things.

“They both deserve to be in the final. I really want Serena to win because I’m a big fan of hers and she deserves it.

“I know some of the German players as well, almost the whole team because I played with them at my old club, but still, Serena is very strong tactically, so I think they can make it.”

Throughout the tournament, TV cameras have shown young girls in the crowd with beaming smiles, dancing, celebrating and taking the occasion in, leaving Liverpool manager Matt Beard in no doubt that the women’s game is to go “from strength to strength.”

“Whatever goes on, the England players have definitely inspired the next generation,” he told TIA.

“I just think the WSL last year going to the last game of the season, how exciting it was.

“It’s just going to go from strength to strength and we’re looking forward to being back in that league and testing ourselves against the best players and best coaches in the world.”