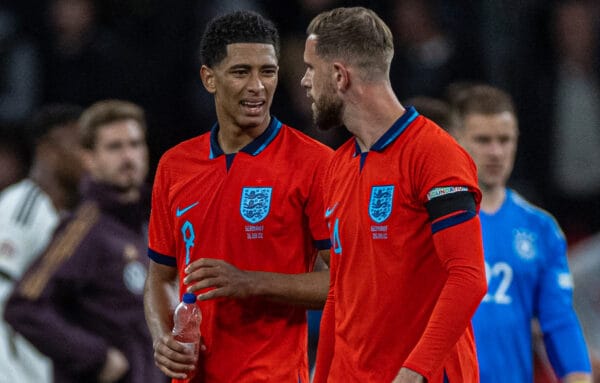 Liverpool captain Jordan Henderson has admitted he is a big admirer of reported transfer target Jude Bellingham, with the duo featuring together for England this week.

Borussia Dortmund midfielder Bellingham is expected to be top of the Reds’ transfer wish list next year, with a host of Europe’s top clubs set to battle for his services.

Many supporters wanted to see the club add to their midfielder ranks in this year’s summer window, but after first-choice target Aurelien Tchouameni opted to join Real Madrid, the club were reluctant to spend big money on alternatives.

Arthur arrived on loan from Juventus on deadline day, but many believe the Reds are gearing up for a move for Bellingham at the end of this season.

And speaking after teaming up with the 19-year-old on international duty in the last fortnight, Henderson has explained why he rates Bellingham so highly, claiming the youngster will have a big part to play at the World Cup.

“I like Jude, I think he’s an amazing player,” said Henderson while speaking at a McDonald’s Fun Football event, as quoted by the Mirror.

“He’s a fantastic professional and his mentality is really key for his development.

“I almost don’t want to big him up too much because he’s still a young lad!

“There will be a lot of pressure on him at a young age, but of course he’s a top, top player, and I’m sure he’ll have a big part to play in Qatar.”

Henderson replaced Bellingham towards the end of the Three Lions’ 3-3 draw with Germany, with the Dortmund star going on to receive the Man of the Match award.

It was the Liverpool skipper’s first appearance since sustaining a hamstring injury in Liverpool’s 2-1 win over Newcastle at the end of August.

He is expected to be available for selection when the Reds take on Brighton this weekend, the first of 13 matches in six weeks before the mid-season break for the World Cup.

“It was nice to be back after a few weeks out,” Henderson continued.

“I had a good week’s training and then it was great to come on and get a few minutes against Germany.

“I’ll get some more training in this week and then I’ll be ready for the weekend.

“There are so many games to get in before the World Cup, so we’re going to need everybody fighting and fit for as long as possible as we try and get through this period. We need to try and get back to the results and the performances we’re capable of.”

The pair are still regularly in contact, with Henderson expecting the 34-year-old to receive another good reception from the Anfield crowd.

“I speak to Adam a lot, and yeah he’s looking forward to coming back to Anfield and I’m sure he’ll get a fantastic reception as always, as he has before,” he added.

“I’m sure he’ll be ready for the game, but for me it’s a case of business as usual as soon as it kicks off and hopefully we can show that.”