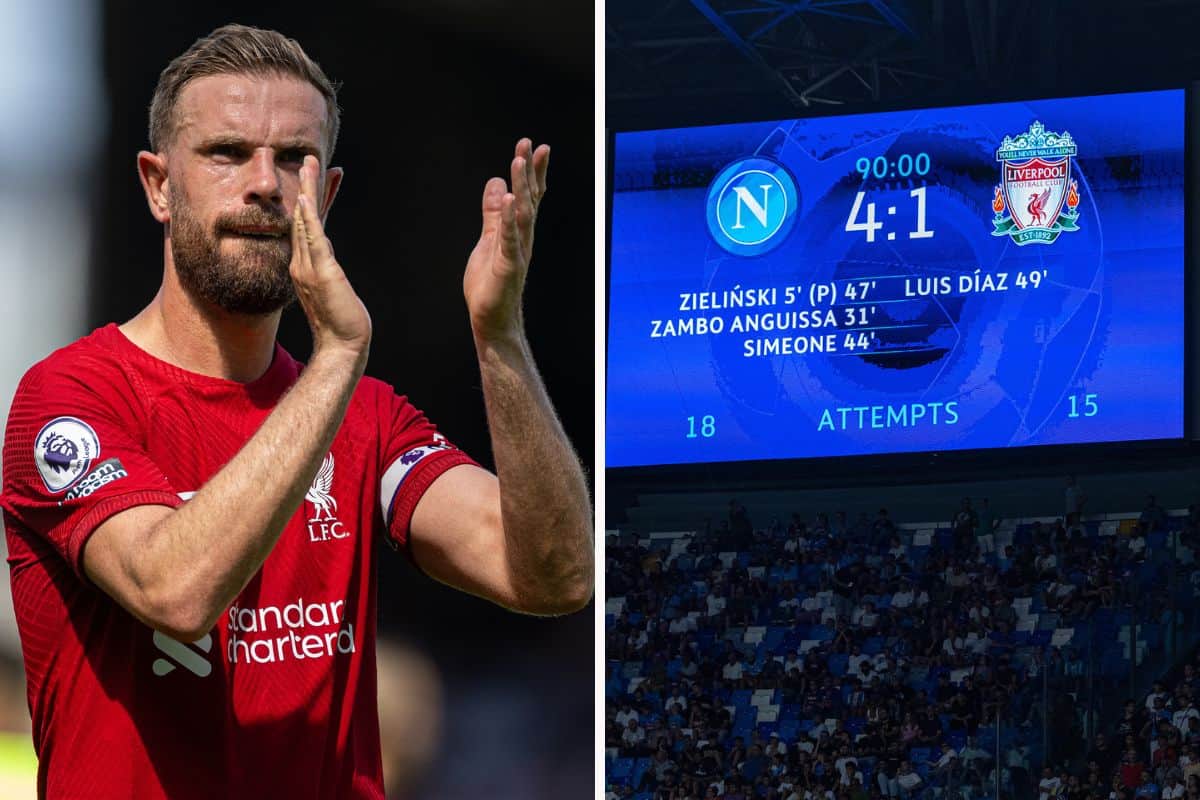 Despite being ruled out of the game due to injury, Liverpool captain Jordan Henderson says he must take “a share of responsibility” for the Reds’ 4-1 defeat to Napoli.

Henderson is currently sidelined with a hamstring injury that he sustained in the 2-1 win over Newcastle last month.

He is not expected to be available again until after the international break, and was not part of the travelling party that made the forgettable trip to Naples last week.

However, the Liverpool skipper says it’s only right that he takes some responsibility for the teams’ drop in standards, which led to a performance Jurgen Klopp says was the worst he has overseen since his arrival at the club.

Having lost their Champions League opener and only won two of their opening six league matches, Henderson has acknowledged the Reds’ start to the season has been far from good enough. 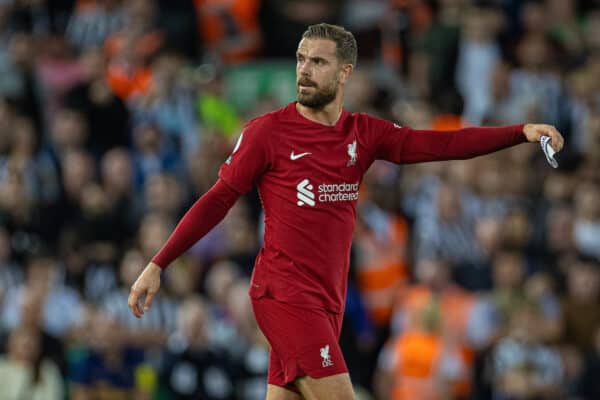 “There haven’t been too many games where we have let ourselves down individually and collectively in recent seasons, but there’s no question that this is exactly what happened against Napoli,” Henderson said in his matchday programme notes ahead of Liverpool’s clash with Ajax.

“Injury might have prevented me from being out there with the lads, but that does not mean I didn’t play a part because these kinds of setbacks tend to happen when standards have dropped over a period and, like everyone else, I have to take my share of responsibility for that.

“This isn’t me being overly harsh on myself or trying to take the pressure off the other lads either.

“The reality is that unless we stick to the gaffer’s mantra of everyone being responsible for everything we won’t get the reaction we need not just to what happened in Naples, but also to a start of the season which has not been good enough.

“Yes, there have been a few positives here and there, but there haven’t been anywhere near enough of them and this has to change. It has to change quickly.”

Tuesday’s meeting with Ajax is the last game Liverpool will play this month, after this Sunday’s scheduled league encounter with Chelsea was postponed.

The Reds will be hoping that the international break will end up having a positive outcome on their season, with Henderson and several of his other team-mates hoping to return from injury in time for the visit of Brighton on October 1.

For now, Henderson is adamant that Liverpool’s struggle for form is only temporary, and has challenged the team to take it upon themselves to overcome a difficult period.

“Let’s get one thing straight right now, though: we haven’t become a bad team overnight,” he continued.

“The quality in this squad is frightening. We have players who have delivered over and over again at the very highest level.

“As a team, we have won trophies, reached finals, gone deep in so many competitions, played great football and given pleasure to so many.

“There’s no doubt that we are currently in a bad moment, but we have the ability to change that so it is up to us to do so.”