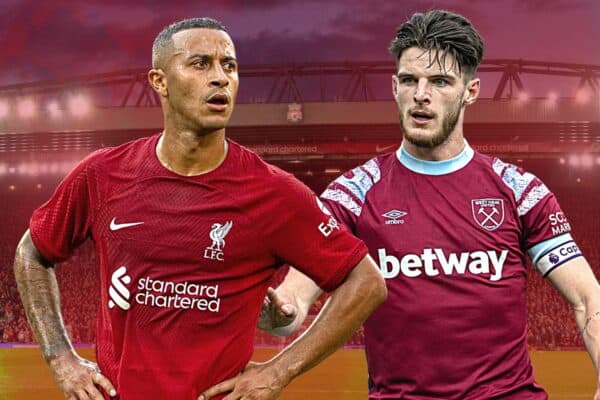 10 key things to know ahead of Liverpool vs. West Ham

Just three days after their impressive win over Man City, Liverpool are back at Anfield on Wednesday evening, with David Moyes’ West Ham the visitors.

The Reds went into their meeting with the Premier League champions knowing they would need a near-perfect performance to stand any chance of getting something from the game.

And that’s exactly what they delivered, with Mohamed Salah‘s second half strike securing all three points in a highly eventful game on Sunday.

A huge result, yes, but Jurgen Klopp was in no mood for fist pumps at full-time, knowing his side still have plenty of work to do to improve their league position.

The challenge now is to back up an excellent performance and result with more of the same in the coming weeks, with the games coming thick and fast as we race towards the mid-season break for the World Cup.

West Ham are the next side that stand between Liverpool and another vital three points, as the Reds gear up for a midweek Premier League encounter under the lights at Anfield.

Liverpool’s last two results read well. Now, they must ensure they retain the same performance level for the rest of the season.

Go into their upcoming fixtures with the same intensity and aggression they showed against Pep Guardiola’s side and the Reds will cause any team problems.

Whisper it quietly, but should they beat West Ham and follow that result up with victory against Nottingham Forest on Friday, they will be just four points behind City before their next match against Brighton this weekend.

It’s time for this team to start showing some consistency.

2. Will Klopp be in the dugout?

It looks that way.

On Tuesday afternoon, the FA confirmed that Klopp had been charged with improper conduct following his behaviour in the 86th minute against City, which ultimately led to his sending off.

He has until Friday to respond, and should his charge stand, he may be forced to watch Saturday’s game against Nottingham Forest from the stands.

For what it’s worth, Moyes says he wants to see Klopp in the dugout on Wednesday night.

“First thing I’ll say is that I hope he is in the dugout opposite,” he said.

“Part of this job is you want to play against the best, compete against them and Jurgen is up there with them all with what he has done for Liverpool over the years.”

3. Have West Ham turned a corner themselves?

Possibly. They’re certainly in better spirits now than they were before the September international break.

They haven’t lost any of the five matches they’ve played since, with four victories on the bounce heading into last Sunday’s draw at Southampton.

Their improved form means they’re just two points behind Liverpool in the table, having played a game more.

Summer signings Lucas Paqueta and Gianluca Scamacca are beginning to show why the Hammers spent a combined £85 million on the pair in the summer transfer window, while Jarrod Bowen is also back in the goals.

This certainly isn’t a guaranteed win for Liverpool.

4. Defensive concerns for the visitors

West Ham do, however, currently have a number of absentees in defence.

Summer signing Nayef Aguerd remains out, while Moyes said on Tuesday that Kurt Zouma has recovered from illness but may not be ready for their trip to Anfield.

Fellow centre-back Craig Dawson is also a doubt, having missed their draw with Southampton due to a thigh injury.

Their problems at the back forced Moyes to set up with a makeshift defence at St. Mary’s, with Ben Johnson and Aaron Cresswell starting as part of a three-man central defence.

A good time to be facing an in-form Salah? Perhaps not.

5. What to do without Jota?

Klopp’s decision to move away from his usual 4-3-3 system to a 4-4-2 has worked well in recent weeks, with Liverpool looking more solid, while also posing a bigger threat in attack.

Injuries, though, continue to make things tricky for the boss, who must now decide whether he can realistically stick to the same formation without Luis Diaz and Diogo Jota.

Jota was stretchered off deep into stoppage time against City, with Klopp confirming on Tuesday that the Portugal forward will miss the World Cup and will be sidelined for “months.”

If he does decide to go with the same formation, Fabio Carvalho is possibly the most likely player to fill the void on the left side of Liverpool’s attack, having impressed against Rangers last week.

Here, we list three other ways Klopp could set his team up without Diaz or Jota.

6. Could Alexander-Arnold be in from the start?

Trent Alexander-Arnold was a shock inclusion on Liverpool’s bench to face City, just one week after sustaining a nasty-looking ankle injury against Arsenal.

Reports suggested the initial timescale for his recovery was around two-to-three weeks, but having come on in the closing stages of the victory over City, the right-back should be in contention to return to the starting lineup at some point this week.

Whether Klopp feels Alexander-Arnold can start the West Ham game and the Nottingham Forest game is a different question, with a short turnaround time between Wednesday night and Saturday lunchtime.

Ibrahima Konate could return to training this weekend, while Curtis Jones, Calvin Ramsay, Naby Keita and Alex Oxlade-Chamberlain are no longer injured but need time to build up fitness.

Here are two ways the Reds could possibly line up against the Hammers on Wednesday.

An intriguing press conference from the boss on Tuesday, including some comments on how the injuries to Diaz and Jota could affect his thinking in terms of the team’s formation.

Klopp was asked whether he “was confident” that his players would be able to go on another consistent run of results.

“I know where your question is leading to – ‘can you do that for that long?’

“That’s why we change lineups as much and as often as we can without changing the structure, but of course now two players who played on the left for us are out for a long time.

Salah has scored nine goals against the Hammers – the most he has scored against team in the Premier League alongside Watford.

Since losing to Crystal Palace in April 2017, Liverpool are undefeated in the last 83 league outings at home in front of fans and in the last 79 with a full house.

The Reds are unbeaten in 28 Premier League home fixtures since losing 1-0 to Fulham in March 2021, winning 21 and keeping 16 clean sheets.

With six to his name, Roberto Firmino has scored twice as many league goals this season as any other Reds player.

9. The man in the middle

Stuart Attwell will take charge of this one, having also overseen the Reds’ 9-0 win over Bournemouth earlier this season.

A similar scoreline here would be nice!

For those in the UK, the game is being shown on Amazon Prime Video, with kickoff set for 7.30pm (BST) at Anfield.

However, if you’re not at the game or unable to watch on TV, feel free to join Henry Jackson on This Is Anfield’s matchday blog.