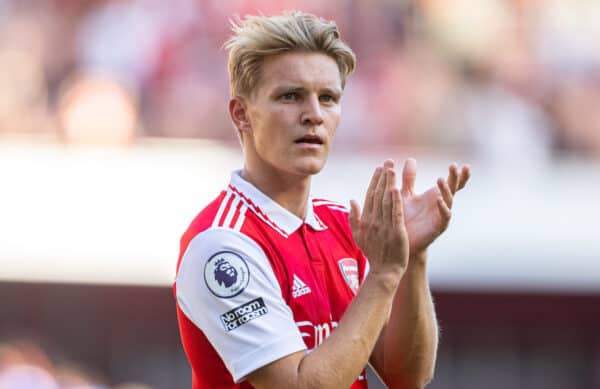 After Jurgen Klopp revealed how he came close to luring a 15-year-old Martin Odegaard to Borussia Dortmund in 2014, the now Arsenal captain has explained how he and his family have close links to Liverpool.

Odegaard is set to feature when the Reds travel to the Emirates Stadium on Sunday, and has been a key player for Mikel Arteta’s side since first arriving at the club, initially on loan, in January 2021.

Liverpool invited the Norwegian for a trial at Melwood weeks before his 16th birthday and, though he described the Reds as his “dream club,” Odegaard opted to join Real Madrid in a seven-figure deal.

Speaking ahead of Sunday’s meeting, the midfielder openly admits the match will be “a special one” for him, with many of his family members growing up supporting Liverpool.

He also revealed his admiration for Steven Gerrard and fellow countryman John Arne Riise as a youngster.

“Now our challenge is to keep our league run going against Liverpool today – another big test for us in the Premier League,” he said in his matchday programme notes.

“It’s a special one for me too, as when I was younger my dad was a big, big Liverpool fan.

“A lot of my family grew up supporting Liverpool in fact, and my brother is here today watching us – but of course he supports Arsenal now, there’s no doubt about that!

“I remember watching Liverpool at home as a kid, and players like Steve Gerrard. Also John Arne Riise of course, I was only young when he was at Liverpool, but I remember the big goals he scored and his famous free-kicks too.

“He’s a huge name in Norwegian football – he holds the record for most appearances for the Norway national team, he won the Champions League at Liverpool too, so he had a big career and was somebody I looked at for sure.

“This current Liverpool side is obviously a very strong team too, and this is another challenge for us today.”

Odegaard, who has three goals in nine appearances for the Gunners this season, went on to point out how the current Liverpool team should not be underestimated, despite their underwhelming start to the season.

The Reds arrive at the Emirates 11 points behind Arsenal in the table, but the 23-year-old says the game will be “a huge test” and a potentially “dangerous” match for his side.

“What Liverpool have done over the last few years speaks for itself and although they haven’t started as well this time as they have in previous seasons, their squad is full of quality,” he continued.

“They have had a few injuries this season, but those players are coming back and this is another huge test for us today at the Emirates.

“Liverpool could be dangerous as well today because they will be desperate to show that they should be higher up the table.

“We’ve got to be ready for that – when teams feel they have something to prove, that can lift them, so all we expect today is a big battle and a huge test.”