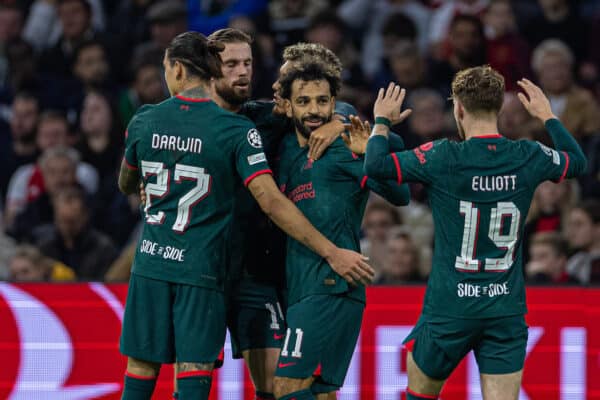 Ajax 0-3 Liverpool: Player Ratings – What the media and statistics say

Nobody was truly outstanding, but plenty of solid individual performances saw Liverpool secure a pleasing 3-0 win vs. Ajax.

The Reds qualified for the Champions League knockout stages for the sixth season in a row, doing so with a game to spare.

The performance in the opening 45 minutes was patchy, but nobody was complaining when Mohamed Salah clipped the visitors in front before the break.

In a far better second half, Darwin Nunez headed home soon after the restart and Harvey Elliott finished brilliantly to make it 3-0.

Andy Robertson (7.9) was Liverpool’s overall highest-rated player on the night, producing arguably his best performance of the season.

The Scot was a bundle of energy and also got an assist to his name, in what is hopefully the start of a strong run of form.

TIA’s Jack Lusby gave Robertson the Man of the Match award, also describing his performance as “bright and bustling from the off.”

Ian Doyle of the Echo felt that the left-back “provided a regular attacking threat” – something that hasn’t always been on show this season.

In second place was Mohamed Salah (7.8), who added another goal and assist and moved to within a goal of being the club’s all-time leading goalscorer in Europe.

The Egyptian enjoyed a 94 percent pass completion rate, according to FotMob, as well as making two recoveries for good measure.

Completing the top three was Elliott (7.7), who scored his second goal in as many Champions League matches.

Lusby lauded the teenager for finding the net in style, while Doyle said he “got through plenty of work” in the first half.

Fabinho (6.6) got the lowest average, with the Brazilian still a long way from the player he was last season.

Up next for Liverpool is Saturday’s visit of Leeds in the Premier League (7.45pm UK).