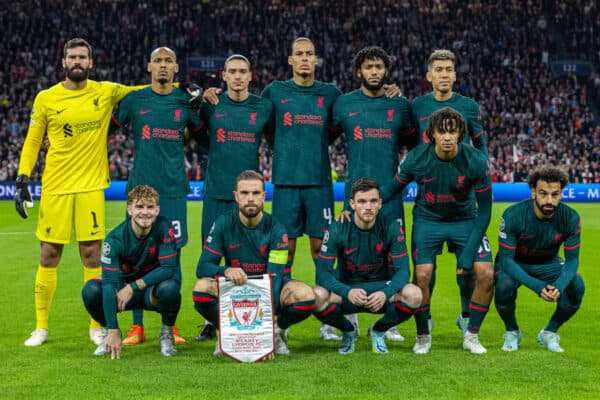 Liverpool looked out of sorts early on, but produced an excellent overall display to dominate Ajax 3-0 and book a place in the Champions League knockout stages with a game to spare.

It was a very comfortable night for Alisson, who gobbled up some loose balls early on and had little to do after his side took control.

On his 200th appearance, he moves above Pepe Reina with the second-highest clean sheet rate in Liverpool history.

Clearly instructed to stick to right-back duties whenever required, Alexander-Arnold settled into the game and showed strength in his defensive work, with a big block to keep out Dusan Tadic.

There were some inviting crosses, too, though none resulted in an assist.

After a questionable afternoon at Nottingham Forest, Gomez was assured and composed alongside Virgil van Dijk, reacting well to danger and building up calmly in possession.

Like Gomez next to him, Van Dijk was reliable at the back, outmuscling the Ajax attack and triggering counters with his direct passing play.

Bright and bustling from the off, Robertson was one of few who showed an understanding of the 4-4-2 diamond system early on, and the left-back only improved, too.

He was front-footed throughout and sent in a perfect cross for Darwin Nunez‘s goal at 2-0.

At times erratic positionally, but so was nearly everyone else.

Henderson showed urgency in midfield and pulled off a brilliant outside-of-the-boot pass for Mo Salah‘s opener.

Hopefully there are no lasting issues with his knee.

Still something of a worry, Fabinho toiled as the deepest-sitting midfielder, particularly early on when he was breezed past by his Ajax counterparts.

The Brazilian improved, and the hope will be that the return of Curtis Jones and Naby Keita allows Klopp to rotate a little more and relieve pressure on his No. 3.

Showed endeavour but lacked conviction in the opening stages, finding his feet in a slightly different role on the right side of the diamond.

His confidence rose as the game wore on, and he got his goal in style. What a hit.

In a natural role as the deep-dropping No. 10, Firmino was able to pull the strings between the lines before offering more of a presence in the final third as Liverpool took control.

Should have come away with an assist for Nunez’s effort against the post – or have scored it himself!

Found himself caught in two minds as he adapted to the diamond formation, but Nunez kept up his record in front of goal despite a shocking miss just before half-time.

He was a nuisance to the Ajax back line and nodded in his fourth goal in five games for 2-0.

Like Nunez, Salah struggled in the new system for much of the first half, before exploding into life.

It was a lovely finish for 1-0, regardless of the goalkeeper’s positioning, and a fine pass to lay it on for Elliott to seal progress to the last 16.

Curtis Jones (on for Nunez, 63′) – 7 – Took undeserved criticism after the loss at Forest, but showed his quality again in a possession-heavy cameo.

Stefan Bajcetic (on for Fabinho, 71′) – 6.5 – Wore his socks around his ankles, asked for the ball at every opportunity, shot from 30 yards, defended well when required. A solid outing.

At 40 minutes in, it seemed like a disaster from the manager; a strange change of system when a return to the 4-3-3 may have made more sense.

But as Liverpool eventually clicked into gear, scoring one, two and three, the virtue in switching to a diamond midfield shone through.

It may have been a case of getting all of his best, fit players onto the pitch to coax a response to that nightmare in Nottingham, but Liverpool got the job done.

Will the diamond stay? It’s unlikely. But it paid off in Amsterdam.

A real positive came, too, in bringing off Nunez, Fabinho, Elliott and Henderson with plenty of the game to play; all four are likely to start against Leeds on Saturday night, all being well.