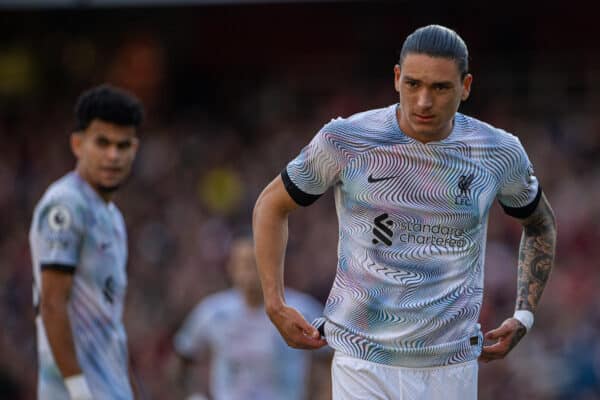 Liverpool were beaten 3-2 at Arsenal in the Premier League on Sunday, with too many players again falling short of their best.

Alisson was his usual steady self between the sticks and was blameless for Arsenal‘s goals.

His distribution was reliable throughout and he showed some good decision-making from corners as the minutes ticked by.

Another game and more question marks against Alexander-Arnold and his defending.

The 24-year-old was awful for Bukayo Saka’s goal, showing a lack of intelligence by charging across to Gabriel Martinelli.

Simply has to do better and was deservedly substituted at half-time, under a fitness cloud having rolled his ankle.

Matip has largely done well this season, despite Liverpool’s struggles, but he was disappointing here.

The centre-back lacked calm in and out of possession and he produced a shoddy performance in the second half that saw him all over the place.

That forced Jurgen Klopp was replace him with Ibrahima Konate.

The Dutchman still doesn’t quite look like the all-conquering force he has been in the past, even though there were positives.

There just feels like there is a slight casualness to him at the moment which isn’t helping the Reds, with not enough intensity to his game.

Made some key interceptions, though.

Tsimikas again played in place of the injured Andy Robertson, but this was an unconvincing showing from him.

Too often the left-back found himself too far up the pitch and his defensive work left plenty to be desired up against Saka.

Showed plenty of endeavour, but he is a sizeable step down from Robertson.

Henderson started in a two-man midfield alongside Thiago, and while there was some good on show, his penchant for being out of position again proved to be costly.

The skipper was in no man’s land for Martinelli’s first-minute strike, affording Martin Odegaard too much space, and that happened more than once.

Did dictate the midfield battle for some of the proceedings, particularly during the latter part of the first half, but his best days are behind him.

Thiago is a wonderful footballer to watch and he was one of Liverpool’s better players against the Gunners.

His quality on the ball was a level up from any other midfielder on the pitch, although he was weak in the tackle in the lead-up to Saka’s strike.

Then conceded the penalty which the Arsenal winger scored, although it was a very harsh call from Michael Oliver and we await Gabriel Jesus’ Oscar nomination.

Salah has been well below his best this season and this was another game that saw him on the periphery of the action.

Barring one dangerous dribble in the first half, the Egyptian King was subdued and seemed to lack confidence in attacking areas.

Much more is required.

Jota retained his place and was one of Liverpool’s best players, producing a dangerous performance.

He teed-up Roberto Firmino for the Reds’ second goal, playing a neat pass into the Brazilian, and he always looked like making something happen.

An unsung hero, in many ways.

Diaz was another who looked a real threat, but unfortunately, his afternoon was cut short by injury.

Some trademark darting runs stretched Arsenal‘s defence and he provided the assist for Darwin Nunez‘s goal, prior to going off.

The hope is that his injury isn’t too serious.

Nunez was undoubtedly the biggest plus point on the day, putting together his best display in a Liverpool shirt to date.

The Uruguayan scored the Reds’ first goal, finishing well in front of goal, and he showed good movement and pace throughout.

The goals will come more regularly now and he should be feeling more confident.

Firmino finished brilliantly to make it 2-2, but was otherwise relatively quiet.

Better defensively than Trent, but still far from perfect.

Solid on the whole in his first appearance of the season.

Neat and tidy in possession.

Not a lot of time in possession to make a mark.

The hope was that the midweek win over Rangers would see a change in fortunes at Liverpool, but his was another desperately disappointing afternoon.

Klopp once again went with a four-man attack but the Reds were never fully at the races and the manager has to share a portion of the blame for that.

Quite what is going wrong at the moment does feel baffling and Klopp has a huge job on his hands, in what now feels like a genuine top-four battle.