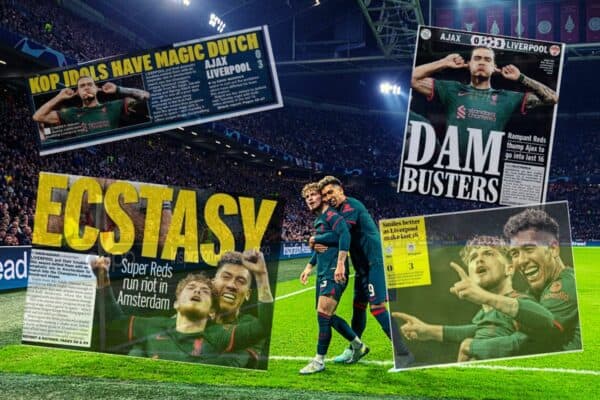 Liverpool cruised into the Champions League knockout rounds with a 3-0 win at Ajax, with the media assessing a good night at the office.

Jurgen Klopp‘s men were more impressive as the night went on on Wednesday, picking up a confidence-boosting victory.

Mohamed Salah, Darwin Nunez and Harvey Elliott got the goals for the Reds, as they booked a place in the last 16 with one match remaining.

Here’s how the media reacted to Liverpool’s win.

This was much more like it from the Reds…

Andy Hunter of the Guardian hailed Liverpool’s form in Europe:

“In a season of maddening inconsistency for Jürgen Klopp he has at least found familiar comfort in the Champions League.

“Liverpool secured their place in the knockout stages with a game to spare, their troubled away form and injury problems forgotten as qualification was wrapped up with an ultimately comfortable defeat of Ajax.

“For Liverpool, it is the familiar ground of the Champions League knock-out phase that beckons for a sixth successive season.”

“In Holland here, Liverpool showed us the best and the worst of them currently.

“They should have been behind in just the second minute when Steven Berghuis hit a post when it looked easier to score and were generally wretched for the first 30 minutes.

“During periods of play like that, they can look desperately ordinary. Vulnerable, even.

“Then came the awakening. First Mo Salah from a Jordan Henderson pass three minutes before half-time. Then a Darwin Nunez header early in the second half followed instantly by a rasping Harvey Elliott strike from an angle.

“It was some turnaround and enough to see off an Ajax threat that seemed to evaporate once they didn’t take any of a number of early chances.”

Harri Thomas of the Telegraph was impressed with the efficient manner of the victory:

“Job done, mission accomplished for Liverpool. Klopp’s men are through to the last-16 of the Champions League.

“They’ve done it with some style: Salah with a clinical chip over Pasveer to open proceedings, before Nunez steered his header into the far post from Robertson’s corner a few minutes after half time, and then Elliott rifled one in from a tight angle moments later.

“They weathered the first-half storm, but buried the game six minutes after half time, dominating the rest of the match.”

Gary Lineker took to Twitter to show his admiration for Elliott and to poke fun at himself:

Goal‘s Neil Jones focused on the brilliance of Salah once again:

“Another Champions League night, another Salah masterclass. So often, the Egyptian has been the key man for Liverpool in this competition, and he was again here, scoring the Reds’ first goal, creating their third and generally causing havoc throughout.

“With a goal and an assist, Salah becomes only the third player to reach 50 goal contributions with an English club in the Champions League, following in the footsteps of Thierry Henry and Ryan Giggs.

“He is now only one goal behind Steven Gerrard’s record of 40 European goals for Liverpool. A special player, whichever way you slice it.”

This Is Anfield‘s Mark Delgado enjoyed the increased influence of Andy Robertson and Trent Alexander-Arnold:

“Robertson was the first to start racing on into space down the flanks, linking up well on the outside and combining in the final third to provide a better out-ball for the Reds (or the greens, on the night).

“Trent too then started getting into space, providing the width and delivering passes, more than crosses, from decent areas.

“Add in Firmino getting into the game in better areas, offensively and defensively, and the shape looked much better as the game moved into its middle half-hour.”

Now, Liverpool must build on this win…

Ladyman now sees this as a chance to pick up a run of positive results:

“Liverpool have bumped and banged through the first third of the campaign, hampered by injuries and dogged by poor form.

“But with three games against Leeds, Tottenham and Southampton between now and the mid-season World Cup break, they have an opportunity to head for their winter hibernation at least in touch with the top four teams.

“After all that has happened already this season, there would be something to take from that. With a rest may yet come some kind of renewal.”

“Liverpool’s inconsistent start to the season, epitomised by another disjointed performance in a shock 1-0 defeat at Nottingham Forest at the weekend, has frustrated their supporters and left some wondering about the direction of Klopp’s side.

“The prospect of a smooth passage to the Champions League knockout phase was far from certain after a heavy defeat by Napoli in their opening Group A game.

“But their vast experience in Europe’s premier club competition, which they won in 2019 and finished runners-up last season, has eventually provided much-needed comfort and swiftly brushed away any early fears of not progressing.

“Now Klopp’s task is to ensure his side can finally start stringing together convincing performances in the Premier League, starting with Saturday’s visit of a Leeds United side bereft of confidence.”

Finally, Delgado was in positive spirits about a change in fortunes:

“Look, we already know the league is a no-hoper this season. We have to try and get Champions League football through the top four, which will take some doing.

“We’ve now also got three months or so to sort out our form and approach before we get any meaningful matches in this competition again – plus a transfer window, of course.

“In the meantime it’s going to be about rediscovering the winning touch on a far, far more regular basis, starting with Leeds at the weekend.”