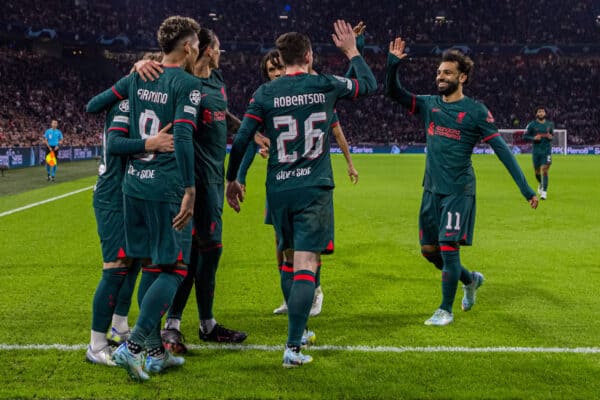 Liverpool wrapped up Champions League progression with a game still to play in the group thanks to a 3-0 win away at Ajax despite an uncertain first half.

The latest alteration in Liverpool’s tactical search for consistency saw a slight tweak in Europe, as Jurgen Klopp effectively opted for split strikers and a diamond in midfield – Firmino playing at the tip of it.

It was definitely flexible and fluid, though we hesitate to use words as they sound positive; perhaps uncertain and reactive is the better way to describe it.

Klopp invited onlookers to decide who was playing on the left; at times we had a line of three up top with Darwin out there, but other times it was a very, very wide and staggered midfield quartet with Henderson by the touchline.

If the first half told us two things, the first was that the players were a million miles away from being sure about their roles on and off the ball.

It was disjointed, lacking cohesion and uninspiring going forward and definitely not solid or impassable defensively.

The second was that no matter how poor things get, Liverpool do still possess attacking talent to simply win matches. Salah’s finish was unerring, Nunez’s header wrapped things up.

Full-backs step it up

Early on it was all-round a shambles.

The midfield men and defence didn’t seem to have it too clear who needed to step out, who dropped in after transitions, who went on the overlap.

However, half an hour or so into the game, either the players themselves or the shouting coaches on the sidelines seemed to sort it out and we got much of what you’d expect from the full-backs in particular in this system.

Robertson was the first to start racing on into space down the flanks, linking up well on the outside and combining in the final third to provide a better out-ball for the Reds (or the greens, on the night).

Trent too then started getting into space, providing the width and delivering passes, more than crosses, from decent areas.

Add in Firmino getting into the game in better areas, offensively and defensively, and the shape looked much better as the game moved into its middle half-hour.

What a weird night, let’s be honest. We didn’t do loads going forward before we scored – a couple of set piece deliveries was about it.

Salah, though, remains lethal with a single chance.

He didn’t have much build-up involvement before he was near-gifted an open goal and his brilliant first-time clip killed the mood in the stadium as well as effectively putting us into the last 16.

Mo then went on to create a couple of other chances and claim an assist with a brilliant reverse pass for Elliott too.

As for his forward partner Darwin Nunez, he missed the easy chance and scored a really difficult one, heading in while being grappled by two defenders.

It would be important for his confidence for that to go in no doubt, given he hit the post from five yards out with the goal at his mercy a few minutes earlier before the break.

A game and a half of match- and minutes-management for Klopp.

Two quickfire goals after the break ended this fixture 40 minutes early as a contest or a stress-inducing occasion, meaning when we lowered the average age by a considerable margin, it didn’t have too much effect.

Bajcetic, Carvalho and Jones are all 21 and under, while squad regulars Milner and Tsimikas also got time on the pitch.

As important, Fabinho, Elliott, Nunez and Henderson were among those to head off early, the latter with a concerning knee knock.

Looking ahead, we can now do exactly the same on matchday six against Napoli: rotate with whoever isn’t in the team every week (and is in the Champions League squad, so not Ox) and give all-important rest time to a few stars.

We can’t lose Mo, Virgil, Alisson and a couple of others, so we’d rather not see them at all for the final group game.

Kelleher in goal, Adrian centre-back and Nat Phillips up top is absolutely fine.

Look, we already know the league is a no-hoper this season. We have to try and get Champions League football through the top four, which will take some doing.

We’ve now also got three months or so to sort out our form and approach before we get any meaningful matches in this competition again – plus a transfer window, of course.

In the meantime it’s going to be about rediscovering the winning touch on a far, far more regular basis, starting with Leeds at the weekend.

It’s imperative Klopp finds the right way to get us back to being relentless, tough to beat and totally assured in our own game. The first 30 minutes here was absolutely not that, so regardless of end result, there’s still a lot to work on.