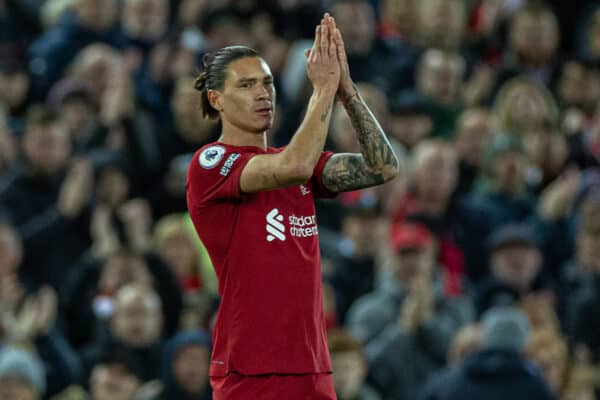 A third win on the spin, a second successive clean sheet gained, Darwin Nunez scoring for his third start in a row, there were plenty of positives to Liverpool’s victory over West Ham, but there is still work to be done before we can say we are completely back in the groove.

Liverpool could have had this one comfortably in the bag long before half-time. As reassuring as it was to see Nunez on the scoresheet once again, on another day he would have gone in for the interval with the match ball already up his shirt.

Denied from a wonderful half-volley by the alert Lukasz Fabianski, Nunez also thundered another excellent effort off the Anfield Road end goalposts. Yet the more these chances passed us by, the more endangered our prospective three points became.

By the time Alisson was magnificently pawing away Jarrod Bowen’s penalty, it was a save that was almost born from a sense of incandescence that we were on the brink of going in for the break on level terms, after 43 minutes of complete and utter domination.

From the resumption, a more even second half unfolded, which left West Ham feeling hard done by in heading south without a share of the points. It was a game of blunt nuances, both on and off the pitch.

Outside the ground after the game, many of those who had travelled from east London chose to voice their displeasure with more of the tired old poverty ballads that they had been airing inside for much of the evening.

For them, it was a case of form is temporary, a lack of class is permanent.

Within this, I have a lot of time for Nunez’s winning goal; while there was something comfortingly bludgeoning about it, there was equal joy to be procured in that it was a goal that lodged the lyrics of the visiting support in their throats mid-flow, as ‘God Save the King’ and the ‘sh*t Andy Carroll’ dirges swiftly tailed off as the ball hit the back of the West Ham net.

Yes, there are still rough edges to be smoothed down, and there is a degree of growing up to continue for what Jurgen Klopp admits is a homesick player, but when it comes to Nunez, bit by bit we are getting to see the emergence a boss Andy Carroll.

Power and pace to burn, Nunez is familiar with the route to goal, but he has brought an overtly direct nature that has been jarring for his new artisan teammates at times.

When you look at a set-up where Bobby Firmino is only truly happy if a goal is scored with a jaunty helping of the esoteric, conversely, Nunez seemingly has no time for nonsense.

For the Uruguayan, it is all about minimalism and footballing brutalism. The task for Klopp is to blend these two-polarising ethos, along with all the grey areas in between.

While the significant spells on the sidelines for Diogo Jota and Luis Diaz is a biblical blow, their absences will afford Nunez the time to grow into his surroundings more swiftly across the weeks that lead up to the enforced World Cup winter break.

Already, his work ethic is proving to be contagious, and the team as a whole seems to be covering far more ground per game than it was a couple of weeks ago.

What is surprising about Nunez is the unexpected flexibility he plays with. The lazy early trope about him is that he is a blast from the past, the resurrection of the traditional centre-forward.

Yet, he is comfortable dropping deep, or drifting wide too, something that permits Mohamed Salah to wander into central positions in a manner that was lacking just a short few games ago.

As part of this, Klopp isn’t bound to the usual laws of a team that fields a pantomime ‘yard dog’ up front. While most teams with a ‘big man up top’ must conform to a brand of human Subbuteo, these scriptures don’t apply to Liverpool and Nunez.

He is just as comfortable with the ball at his feet and running at opponents as he is arrowing past them in mid-air on the way to an aerial assignment.

On Wednesday night I dedicated around 15-to-20 minutes of that impressive first half to formation-watching, Nunez pulled from one direction to another, during which Klopp’s players morphed through patterns as diverse as 2-4-4, 4-2-4, 4-4-2, 4-3-3, and 3-4-3.

When in the zone, Liverpool never stands still, and Klopp is constantly moulding his shape as if it were a lump of clay. Even fall-back positioning is open to alteration. All talk of Liverpool’s approach to games in the concept of them fielding one uniform formation for the full 90 minutes plus injury time is absolute folly.

Even though we had that penalty scare, and despite the nature of a narrow one-goal advantage, plus the flirtation of conceding late on before James Milner’s intervention, there was a boldness to Liverpool’s performance against West Ham, as our once missing confidence continues to replenish itself.

Making a triple substitution before the hour was a brash statement to opponents that still had hopes of gaining something tangible from the game, while Virgil van Dijk looked at his most Virgil van Dijk so far this season, as he became another player to reconnect with himself.

In the main, it was all so effortless for Van Dijk, as he covered the pitch with that deceptive, yet relaxed speed of his. When he’s at his optimum levels, the No. 4 is like that comfortable old swing LP your parents or grandparents have in their record collection.

If Dean Martin or Frank Sinatra had been born a central defender, they would have played like our Virgil.

To the City Ground we go next. We’ve still a bit of distance to cover when it comes to our rehabilitation from our troubled start to the season. But another good day in Nottingham will be vital in us getting there.