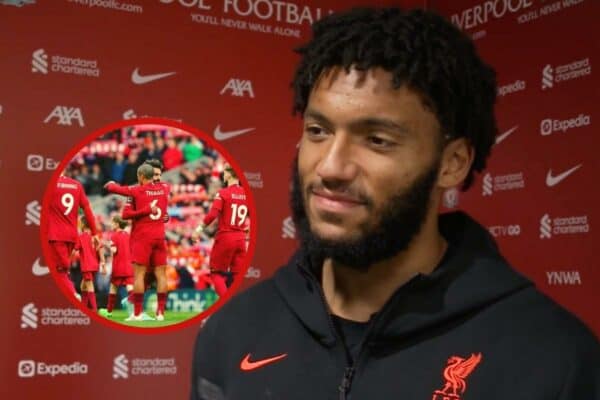 Joe Gomez “appreciates” accolade but focus only on Liverpool “consistency”

Jurgen Klopp heralded Joe Gomez‘s performance as “sensational” and “mature,” with the defender eager to continue building consistency individually and as a team.

The 25-year-old was expected to be needed at right-back for the visit of Man City, but another injury to Ibrahima Konate forced a change to the plans.

Gomez moved back alongside Virgil van Dijk and duly impressed, named Sky’s Man of the Match, lauded by fans and praised by his manager after showing “what a player he is.”

It was his seventh start of the season, his sixth game at centre-back from the off and while it will not have been in the initial plans, Gomez knows to go with the flow and be flexible.

“Yeah, it does require focus and obviously, you try to visualise and then things change, but it’s part and parcel, it’s football,” Gomez told LFCTV of the change in preparations from right-back to centre-back.

“It’s just about trying to have the right approach towards the game regardless. Keep the principles the same.

“I think the whole team has the desire. We have such a good squad and mentality that everyone steps in and just tries to do their best for the team.”

On his Man of the Match award, Gomez appreciates the accolade but with another game in three days’ time, it’s not one he will have too much time to sit on.

“The next one comes around so quick and then after that. For sure, I appreciate it tonight but recover and go again,” he said.

“Personally and as a team we have to keep consistency and try to string some performances together.”

The next chance to do just that is on Wednesday night when West Ham arrive at Anfield, but the win over City is not going to get the job done as the same desire and intensity needs to be shown.

“It has obviously not been plain sailing and a tough year for us, but I think every week we focus on the present and try to learn the lessons,” Gomez reflected.

“We knew we had to keep at it and something would come and something gave today. Hopefully, we just carry on with consistency. It was never about getting too high or too low and it’s the same here.

“It’s three points and move on to the next one and try to keep consistency and keep the pressure up.

“It’s a platform. I don’t think we should get too giddy or anything. Take the positives from the game but focus and play with that same desire in the next one.

“We can’t take our foot off the gas and dwell on this, we have to keep trying to string some performances together and see where it leaves us come the break.”