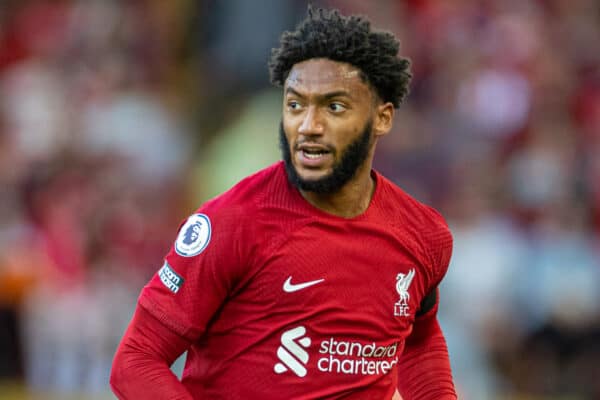 Joe Gomez shifted into his favoured centre-back role against Man City and excelled, with fans quickly hailing his performance after Liverpool’s 1-0 win.

With Joel Matip and Ibrahima Konate unavailable for Jurgen Klopp, Gomez started next to Virgil van Dijk with the task of stopping Erling Haaland and Man City.

At the end of the 90 minutes, it was job done. The 25-year-old was named by Sky Sports as Man of the Match, and for good reason, although Mohamed Salah may have something to say about that.

Gomez was composed and constantly aware of the possible danger around him, quick to react and was crucial for Liverpool as they sprung the most welcome of surprises.

And after the match, he was rightly lauded by Reds across social media:

And that’s why I kept holding my Joe Gomez stocks. His 2018-2020 level showed what a quality CB he is. That patellar tendon rupture he suffered is one of the worst injuries to get. It was always going to take time. MOTM vs the striker tearing the league apart. What a performance.

??Player of the Match is Joe Gomez

A brilliant performance and a return to the team we all know we can be. Gomez and Van Dijk absolutely superb. Midfield relentless. Work rate of the front three immense. Deserved that today. Huge.

Joe Gomez has been the absolute business today!

I just said to Joe Gomez What's that in your pocket, Joe? He said Ohhh that's Haaland. Then he asked me What was in my pocket? I said Ohh that's Foden. It was so funny.

Joe Gomez and James Milner the best players on the pitch.

All of the individuals people have decided are "finished" because Liverpool as a whole have started so poorly remain brilliant footballers and will continue to demonstrate that until they eventually leave.

So many heroes for Liverpool today but I don't think anyone fancied that defensive right side of James Milner and Joe Gomez when the teams were named. Both played a massive role in the clean sheet that won the game.

Thought Joe Gomez was massive. Almost back to the player who partnered with Virgil & took us on the amazing run. MOTM for me.

He just inserted himself back into the England squad conversation and I fuckin love it. https://t.co/F5OFlMURCg

Joe Gomez and VVD today were the standouts. Unreal to limit that UNIT up top???

That was the best I’ve ever seen Joe Gomez play. He was unbelievable today. pic.twitter.com/KVg7dNmjxi

Joe Gomez just put in the sort of performance that shows why I have long said we have a collection of potentially world class CBs at this club.

Matip will be phased out – and it is a real battle between him and Konate to partner Virg.

Incredible from both Joe Gomez and James Milner on the right of defence. Gomez brilliant in and out of possession, Milner used his 36 years’ experience to play on his terms.

Feels like the kind of dominating display Gomez has needed to get back on track post-injury.

With injuries taking their toll and Liverpool’s defensive statistics nothing to write home about, against City, it was, thankfully, a different story.

It was Gomez’s seventh start of the season and certainly his best, and with the World Cup approaching, he will undoubtedly be hoping to catch Gareth Southgate’s eye.

Matip and Konate have long been ahead in the pecking order but Gomez clearly enjoys the challenge and he laid down a new marker against City. More of that please, Gomez!