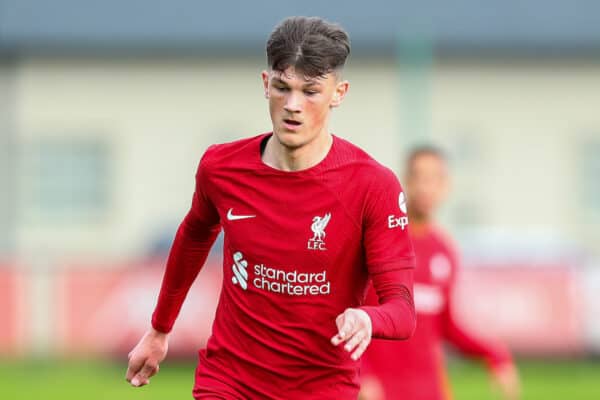 In the last week, Calvin Ramsay played his first combined 72 minutes for Liverpool, albeit for the under-21s, but it’s all part of the plan on his return from injury.

It’s been a long wait that has required patience from Ramsay, who was sidelined on the first day of pre-season after an injury was flagged.

The 19-year-old spent three months in the treatment room before being named in his first senior matchday squad for Liverpool, against Rangers at Anfield, before another minor setback.

But Ramsay is back in training and last week came off the bench for his first game in Liverpool colours, scoring as the U21s lost 3-2 at Accrington Stanley.

That was then followed up by a first start on Saturday in a 2-1 mini-derby win, with his 45 minutes all part of a careful plan from the club – which they’ve utlised before.

“The plan was always 30 minutes against Accrington and then 45 [vs. Everton],” Lewtas explained to the Athletic.

“Our job is to provide an opportunity for the boys to play. We try our best to be a version of the first team and play in a particular way. That’s what enables the boys to come down and play.

“He is with the first team, really. He trains with them. He is fit now but this was an opportunity to build up his minutes as he has not played for a while.

“We have shown in the last couple of seasons, like when Harvey Elliott played a couple of games for us [last season], that this group is a good opportunity to give players minutes, keep them fresh and ticking over.

“We will see what the next step is for him.

“He’s a lovely lad and I’m not just saying that. A really nice boy.

“He came away with us to Accrington, which was nice for him to get to know some of the team. He has settled in really well.”

The minutes in the academy set-up gives Ramsay a chance to restore his match fitness in a competitive setting, as one would expect his full debut to be pencilled in for Derby’s visit in the Carabao Cup.

The League One side make the trip to Anfield on November 9, four games’ time, and that will be an obvious chance for Jurgen Klopp to rotate and hand out opportunities.

But should the Reds clinch qualification to the Champions League last 16 at Ajax, they need just a single point, an opportunity could even come against Napoli at the start of November for the Scot.