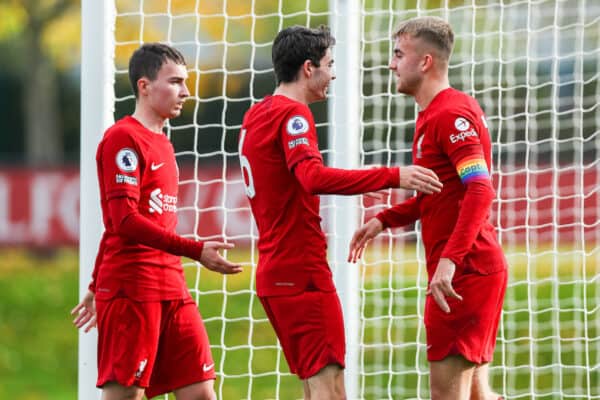 Sixteen-year-old Ben Doak was the matchwinner for Liverpool under-21s in a come-from-behind win against Everton U21s on Saturday.

Doak, signed from Celtic in the summer for £600,000, has caught the eye in his early months on Merseyside and this week has been promoted from under-18s to under-21s.

Having scored a nutmeg, backheel goal from the bench on his first appearance for the under-21s against Accrington Stanley in the EFL Trophy in the week, the tricky winger was handed his first start at this level for the mini-derby.

Also starting was fellow Scot Calvin Ramsay, another signed from north of the border in the summer and making his first start for the club.

The young Reds went behind early on off a corner at the Kirkby academy but levelled through captain Jake Cain before the interval.

Already, Doak was making himself a menace down the right hand side and came close to scoring.

After the break, he got his goal with a left-foot finish, then almost extended the lead after a superb run, beating multiple defenders.

Doak wasn’t the only one to impress, with Cain also producing a standout performance and goalkeeper Harvey Davies and centre-back Jarrell Quansah also rising when needed.

Barry Lewtas‘ young Reds are currently sixth in PL2, with four wins, four draws and one defeat from their opening nine games.

Some of the side will be in action again on Wednesday, in Amsterdam, when they can secure a place in the knockout stages of the UEFA Youth League.