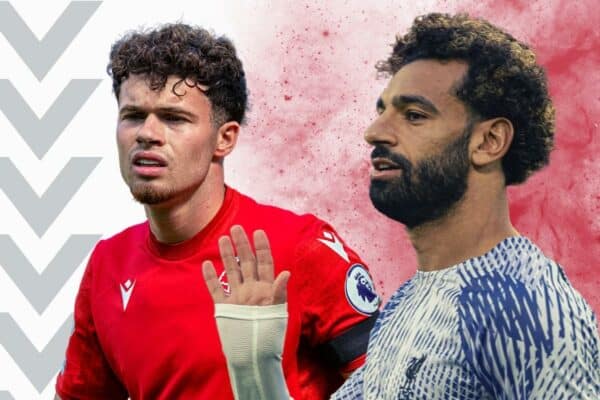 Neco’s date with Salah, “harder to beat” Forest & which Liverpool turn up?

Nottingham Forest are the clear underdogs against Liverpool this weekend and Neco Williams‘ tussle with two former teammates could prove pivotal.

The Reds have secured back-to-back 1-0 wins in the Premier League in the last five days, seeing off both Man City and West Ham at Anfield.

On Saturday lunchtime, another must-win game comes Liverpool’s way, as they make the trip to a newly-promoted Forest with a host of new signings (21!).

It may not be plain sailing for Jurgen Klopp‘s side, however, as their FA Cup clash at the City Ground last season showed.

Ahead of the match, we spoke to journalist Matt Davies (@MattDavies_NP) to hear all about Forest’s season, his assessment of Liverpool and Saturday’s meeting.

How happy are you with Forest’s start to the season?

It’s hard to be happy, but it’s also understandable that it was going to be tough given the step up in class and the number of signings.

There have been some good signs with the win against West Ham and the performance at home to Spurs, but things went pretty off the rails after losing to Man City, with poor performances against Bournemouth, Fulham and Leicester.

Since then, Nottingham Forest have looked a lot harder to beat and now need to get to the World Cup without being adrift at the bottom.

Was it the right call to keep hold of Steve Cooper?

Yes, 100 percent. Given all the churn in the squad, the last thing they needed to do was get rid of the man who was the architect of promotion.

Steve Cooper has made mistakes with selection and formations, but who can blame him with so many unfamiliar players to try and make a team with.

If there was an obvious replacement out there, fans would have been more receptive to him going, but as it was, they rallied for him and there is a case to be made that fan power saved his job.

No individual has had a consistently outstanding season.

A few have shown good signs at different times like Dean Henderson, Lewis O’Brien and Ryan Yates, but generally, it has been a struggle.

It is fair to say Forest need to see more from Jesse Lingard, Renan Lodi, Remo Freuler and ex-Red Taiwo Awoniyi as big summer signings, but it’s early days and they deserve longer to be judged.

I’ve not seen every game, but it’s been a real mixed bag.

They looked awful against Napoli and that seemed to be a watershed as they’ve got better since then.

They appear to be in that difficult phase where top players and professionals like Jordan Henderson are starting to decline, while younger guys like Darwin Nunez and Fabio Carvalho probably need a season or two to settle.

They were excellent against Man City, though, and gave a reminder of the class they still have.

City look like they will win the Premier League title by a big margin and Arsenal have made great strides.

Spurs, Chelsea and even Newcastle are good sides, but over the course of a season, Liverpool’s class should come through.

Which Reds player who you most like to have at Forest currently?

Mo Salah is the obvious answer as he’s a world-class player, but I would have to say Thiago.

His value to Liverpool is most clear when he isn’t playing, and if Forest had someone of his ilk who could control a midfield, they probably wouldn’t be in the bottom three.

Forest’s left-hand side is a problem with Renan Lodi injured and potentially Harry Toffolo, too.

That would mean Neco Williams would be up against old teammates Salah and Trent Alexander-Arnold. The Welshman started well but has found it tough of late.

Forest’s best attacking outlet could be the pace of Brennan Johnson behind that high line.

He drifts to the right, so if Forest can get him good ball, he could trouble Andy Robertson or Kostas Tsimikas.

Realistically, if Liverpool perform they win comfortably, perhaps by a big margin. But they haven’t always done that though this season and Forest have looked harder to beat.

I will say 2-0 to Liverpool, and if that is the outcome and Forest play well in defeat, that is something to build on.

I wouldn’t totally rule Forest out getting a draw, though, depending on the Reds’ performance levels.