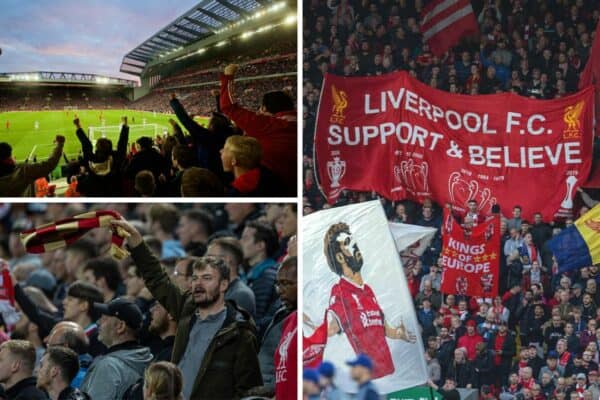 “Where’s your famous atmosphere?” – The Anfield myth or misconception?

It is the greatest place on the planet, a stadium where the impossible seems possible with an aura that must be experienced to comprehend.

Parents and grandparents pass down tales of old, and for every St. Etienne 1977 there is a Barcelona 2019. The team’s status in football ever-fluctuating, but magical days and nights always plausible when the supporters are on their game.

Home of the football club since September 1892, Anfield has seen pretty much all there is to see in the sport, often several times over.

The Kop has provided a backdrop to the tune of 19 league titles and 6 European Cups, dragging players over the line for decades and building what was once an impenetrable reputation in the process.

There are also those (particularly visiting supporters) who use said reputation to highlight and question where Anfield truly sits in the realm of famous footballing cauldrons.

The atmosphere is often dismissed as a “myth” by rival fans looking to score cheap points on social media, and it is a narrative which has been compounded by internal debate in more recent months.

Barry the hypothetical Burnley fan will have you believe that you’ll hear You’ll Never Walk Alone at the start and end of the game, sandwiching 90 minutes of silence, should you pay a visit to Anfield.

You could set a stopwatch during any league fixture and you won’t wait long before you hear chimes of “where’s your famous atmosphere” from the lower Anfield Road End.

Should you choose instead to listen to various icons of the game, you may get a contrasting perspective.

Jose Mourinho, Thierry Henry, Pep Guardiola and Sir Alex Ferguson are among a host of influential figures to have referenced the aura and how it has impacted them from an opposition perspective.

So what exactly generates the divisive opinions? Does Barry have a point? Was it really better in the “good old days” or are we perhaps in danger of coupling nostalgia with our fondest memories of big occasions?

Anfield at its best

What cannot be disputed is the ground’s ability to come alive when it matters most. On big European nights or title run-ins such as 2013/14, there is simply nowhere quite like it.

Anfield has a unique ability to move through the gears when it needs to, fusing the ebb and flow of a game with the energy emanating from the stands.

Whilst we may look on in envy at the cacophony of noise created by a Borussia Dortmund or a Marseille, it is no coincidence that the grandest stages produce the greatest miracles where Liverpool are concerned.

The manager knows the significance of the role supporters play, and that should be enough for anybody to get on board with.

His post-match fist pumps contain added vigour when the ground has played its part and he’s never been afraid to call out quiet days and supporters who have left early.

There are countless occasions where unfavourable kick-off times and unglamorous opponents fail to bring the best out of our home support on a matchday, and that is perhaps where our fictitious friend Barry’s opinions stem from.

There were even instances last season, while the side were chasing an unprecedented quadruple, where the enthusiasm from the crowd failed to mirror the importance of what was occurring on the field.

The reasons can be debated until the cows come home, but finger-pointing seldom achieves anything of substance.

Ticket touts, old fans, new fans, local fans, tourist fans. If the answer was a straightforward one then measures would’ve been taken long ago.

Is it beyond repair?

Plenty pay big money and travel from far and wide to sample the city and the matchday atmosphere, and are always welcome with open arms. What is sometimes forgotten is that by virtue of being part of that crowd there is a responsibility to help generate that atmosphere, it doesn’t happen by magic.

Others make similar trips of similar expense and understand that the role of a supporter isn’t simply to spectate and be entertained, everybody has a part to play.

It is natural to become frustrated if those around you don’t display the same passion, and to an extent that is okay. Not everybody can have the same perspective on the world and the same devotion towards a football team.

Grouping together like-minded individuals is an avenue which has had some success at various clubs and could be a route home here.

In 2007 a movement was formed under the name ‘Reclaim The Kop’, where supporters worked in conjunction with the club to address issues regarding the atmosphere and ultimately enhance the match-going experience.

Season ticket holders were given the option to relocate to a section in the Kop on the premise that they were there to make a noise and help restore the stand to its former glory.

15 years on there are calls for something similar, and with the expansion of the Anfield Road End, that opportunity may present itself sooner rather than later.

If you are fortunate enough to find yourself at a game, you have a duty to those around the world who’d kill to be in your shoes. There are 54,000 in the stadium but millions cheering on from homes and bars across the globe, and in a cathedral as spectacular as Anfield, the thought of that not translating across to the players is bleak.

Let’s get behind this team, they’ve won everything for us and they need us now as much as ever.