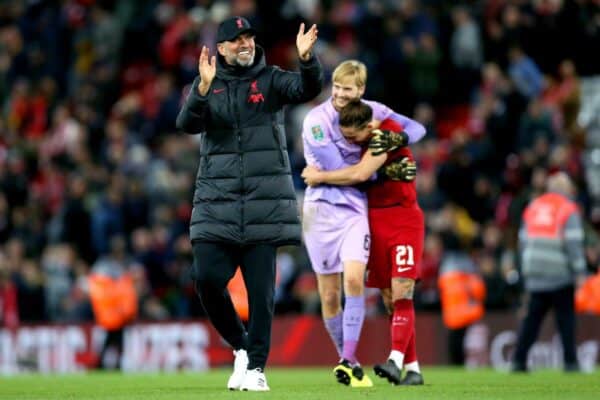 The watching media focused on several young Liverpool stars in their League Cup triumph over Derby on Wednesday, and a certain Caoimhin Kelleher.

The Reds progressed to the fourth round after going the distance at Anfield, overcoming their League One opponents after a dramatic shootout.

Jurgen Klopp changed his entire starting lineup at Anfield, but he will have been pleased with the efforts of his young team.

Here’s how the media reacted to Liverpool’s progress to the last 16.

This Is Anfield‘s Joanna Durkan was another who paid special praise to Kelleher, wondering if he could look to leave eventually:

“The man comes alive when it is time for penalty shootouts – even if it was his first senior minutes of the season.

“Call it his speciality – that’s now four penalty shootout wins, more than any Liverpool goalkeeper in the club’s history, as per Opta‘s Michael Reid. He’s only played 18 games.

“Even though he was not required to take one this time around, after having little to do throughout the match Kelleher was able to be the match-winner in this competition – again!

“Three penalties saved ensured Liverpool’s misses from the spot were not punished and will again start to raise questions over his future – how long will he be content to sit behind Alisson?”

“No wonder Liverpool regard the Carabao Cup as Caoimhin Kelleher’s competition.

“Having proven the match-winner in the final against Chelsea at Wembley in May, the goalkeeper was at it again here to help Jurgen Klopp’s side successfully begin their defence of the trophy.

“Until two routine saves in the last 10 minutes, it was difficult to recall Kelleher touching the ball with his hands, such was Derby County’s determination to sit deep and play for a penalty shoot-out.

“It worked, giving the League One side what appeared a 50-50 chance of progression, aided by the spot kicks being taken in front of the mobile-waving 5,600-strong away support.

“But with Kelleher between the sticks, those odds become stacked in Liverpool’s favour. And despite young Stefan Bajcetic having his penalty saved and Roberto Firmino ballooning over, the Reds could still rely on their Irish shot-stopper to get the job done.”

And the Guardian‘s Andy Hunter felt the match was all about Kelleher’s “prowess” from the spot…again:

“This was all about Kelleher’s penalty prowess once again.

“Kelleher has now saved a total of six penalties in four shootouts for Liverpool, a club record that eclipses Pepe Reina’s five.

“Four of his eight appearances in the competition have gone to penalties and Liverpool have won every one, including last season’s final against Chelsea when Kelleher also scored his team’s 11th and final spot-kick.

Dominic King of the Daily Mail felt there was predictability about the shootout:

“Could it have been any other way? The first trophy of the Liverpool-Fenway Sports Group Era was the League Cup in 2012, secured via penalties.

“They won it again in February, again via penalties, so how fitting that another drama from 12 yards was needed to settle a game in this tumultuous week.

“This, with the benefit of hindsight, should not have come as a surprise. Liverpool have not managed to win a League Cup tie in normal time at Anfield since they beat Leeds in November 2016 and it is certainly not in their nature to do things the easy way.”

An eye-opening statistic was provided by BBC Sport‘s Simon Stone, highlighting Liverpool’s fondness for a shootout:

“It was a deserved success as the hosts carried most of the attacking threat.

“The manner of the victory means Liverpool have still not won a home game in the competition in normal time since 2016. Not that it will bother them too much.”

Away from Kelleher, other youngsters shone, too…

The Mirror‘s Freddie Keighley was impressed with Calvin Ramnsay:

“On the day he was called up to the senior Scotland squad for the first time, Calvin Ramsay put in a fine performance as he made his first start for Liverpool.

“Having come off the bench in the Champions League clash with Napoli, the 19-year-old lined up on the right of defence and exuded confidence as he marauded up and down the flank.

“It was a full debut with plenty of promising signs of what the future holds for the former Aberdeen prospect, who has seen his start to life at Anfield heavily disrupted by injury.”

Durkan also lauded the impact of the right-back:

“On the day it was announced he had received his first senior call-up to the Scotland squad, Ramsay’s maiden start in the senior side – albeit full of youngsters – was certainly a solid one.

“Confident, as seen by his first-half attempt to make the most of the ‘keeper being off his line, alert to danger and with plenty of energy, the 19-year-old showed signs we all wanted to see.

“He was neat and tidy in close settings, slotting next to Nat Phillips on the right side of defence, his quality of balls into the box, though, were hit-and-miss.

“It’s been a long journey to get to this moment for the Scot after months on the sidelines with injury, but his return to fitness and positive showing holds plenty of promise in the bid to make sure Trent Alexander-Arnold has a suitable deputy.

“The Reds have seen the benefits of having Kostas Tsimikas rotate with Andy Robertson, as he did here, and the same is needed on the opposite flank, with Alexander-Arnold having already played the fifth-most minutes of any player so far (1,426).”

“Liverpool’s best attacking player since he came on has been Doak. He’s attacked with real intent and tried to make things happen.”