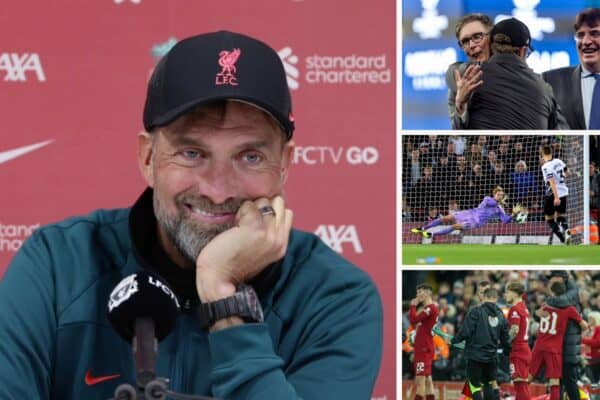 Jurgen Klopp was not short on subjects to discuss, including FSG, his young players, Caoimhin Kelleher and his race to get a drink with the Derby manager after Wednesday’s shootout win.

Here are six key points from Klopp after the penalty shootout win vs. Derby:

Kelleher is the man of the moment in the Carabao Cup, again, after making it six saves in penalty shootouts – more than any goalkeeper in LFC history!

“I can’t remember the other [penalties] but tonight there were three really good penalties, they all go in the corner – so it’s not like they’ve mishit the ball and he saved them anyway.

In his first senior minutes of the season after “a really long time” to get back to speed, Klopp was certainly delighted with his “modern goalie.”

Five young Reds made their full debut against Derby, with Ben Doak given his first senior game from the bench – opportunities that only typically arise in domestic cup competitions.

Klopp has previously been slammed for his rotation policy but he can’t imagine having not given the club’s youth their opportunity.

“We didn’t have a lot of time to prepare but we could at least train once, that’s why we changed.

“We have to make sure we don’t risk anybody and we really love to give the boys opportunity.

“It was like eight or nine young boys, it’s so nice to see them and give them the opportunity.”

“Committed” to the club

The match temporarily took attention away from the news of Liverpool’s owners seeking new investment, but, of course, it was swiftly back on the agenda.

“I don’t understand 100 percent why people think we will get sold,” Klopp said.

“What I read [the statement], FSG are looking for investors, it’s a good idea, I like that.

“Whatever happens, I really like how we work together with our owners. But if that would change, I am committed to the club.”

You can read more of Klopp’s words here.

At just 16, Ben Doak made his Liverpool debut with 16 minutes left on the clock and the youngster was not afraid to take the game on.

“His instructions were easy, do what you do all the time,” Klopp explained.

“He’s a lively boy, smart player, good dribbler, fast, can use both legs – it was nice to watch, eh.

“A lot of things are obviously natural for him which is really helpful – it’s the next step, it’s cool.”

A Liverpool debut at 16, what dreams are made of.

‘I don’t know yet how next round will work’

The Reds are in the draw for the fourth round of the competition, a match that will take place before Christmas.

As for the logistics for that, it is the first game following the World Cup, by just a few days and follows the club’s trip to Dubai for a training camp.

“I don’t yet, but we will find a solution – we have players at the World Cup but there’s a big group for the pre-season and probably will use them, then.

“It makes sense, I think. We will have a few days to prepare [after the training camp].”

The draw is on Thursday night.

“I go now and we have a drink”

Before the match, Derby boss Paul Warne revealed he was eager to meet Klopp for more reasons that one, firstly to take a special photo and secondly to share football talk.

Both things Klopp ticked off, once he finished his press duties, of course!

“If you don’t hold me back I would already be on the bottle with him,” Klopp said.

“I heard somewhere that foreign managers are not used to it [post-match meet ups], it’s true. It’s always because media work is that long that you think let’s go home.