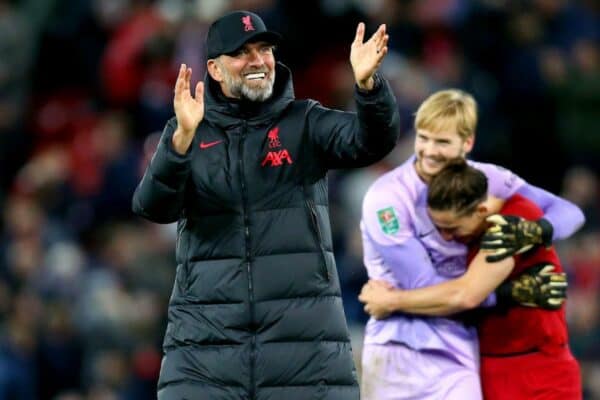 Jurgen Klopp has given his take on the situation with Liverpool owners Fenway Sports Group, insisting he remains “committed” whatever happens.

The buildup to Wednesday’s Carabao Cup clash with Derby, which the Reds won on penalties after a 0-0 draw, was dominated by speculation over the club’s owners.

Reports have claimed that FSG are exploring the possibility of selling the club, though a spokesperson from the US group has insisted they are merely seeking third-party investment.

That is the line that both Pepijn Lijnders and now Klopp have maintained, with the manager describing it as a “good idea” in his post-match press conference at Anfield.

Klopp began by saying that the news had “no impact at all” on their preparations.

“We knew about it a bit longer, their (FSG’s) thoughts, and I don’t 100 per cent understand why we all [say] it gets sold,” he told reporters.

“What I read was they are looking for investors and that makes sense. A good idea, I like that. It didn’t distract the preparation at all.

“For me it means nothing. Whatever happens, I really like how we work together with our owners but if that would change I’m committed to the club obviously.

“As far as I know they’re looking for investors and I thought actually that makes sense.”

Given that suggestions from journalists contrast with the public stance taken by Klopp and FSG themselves, rumours are unlikely to stop over a change of ownership.

The manager has stressed that he believes it is “different” to the situation faced by Chelsea in the summer, when a consortium led by American businessman Todd Boehly bought the club outright.

Klopp stressed again that as far as he understands it, FSG are “looking for investors.”

“It’s completely different, Chelsea had to get sold because the owner was in a trouble, urgently in the situation, we don’t have that here, not at all,” he told.

Either way, though, Klopp is firmly focused on matters on the pitch, which includes plans for the future – and no doubt the upcoming transfer window.

“For me is it important while the process – whatever it is – is happening we keep going and keep planning,” he added.

“These things probably take time. I’m not an expert in this but whatever will happen – and if someone comes in or whatever – until then a lot of things can happen and in that time we have to keep going.

“Not only football-wise, and I will make sure that is the case.

“In the moment, nothing happened, it’s just news that we knew. Nobody had a heart attack when we heard the news.

“It’s a decision, it’s fine and we work really close together with FSG. It is a great relationship and it will not change. Whatever happens we will see and we will deal with it.”