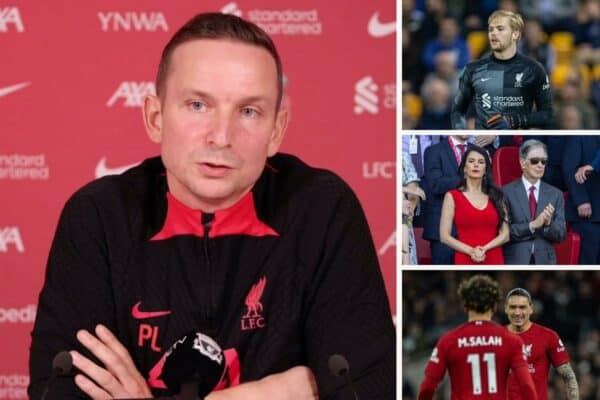 Pepijn Lijnders was in the hot seat ahead of the League Cup match with Derby and the assistant manager talked brilliantly on all things FSG, Real Madrid and giving “moments for talents” at the academy.

Here are six key points from the assistant manager ahead of Wednesday’s game:

FSG ‘acting in the best interests’ of LFC

The news that broke on Monday regarding FSG and the intention to seek new investment has been on everyone’s lips, and, of course, Lijnders could not avoid the topic.

The assistant manager defended the Americans as “good owners” who “act in the best interests of the club,” with the stability and investment they have provided key for the club’s present and future.

Lijnders revealed that “we knew about the statement” in advance of Monday and a “little talk” was had between himself and Jurgen Klopp, but attention swiftly moved to endeavours on the pitch.

The Dutchman spoke at length on the topic and it’s well worth a read in more detail, which you can find here.

Time to mix ‘experience with talent’

The Carabao Cup has long been a competition that sees Liverpool give youth an opportunity – just look at Trent Alexander-Arnold and Curtis Jones.

And it will be the same on Wednesday, with Pep saying: “We always try to mix these games with a lot of experience with talent and you will see a team tomorrow, for sure, who is really hungry to show what we are all about.

“This competition gives moments for talents. We will need the full squad to compete.

“And we are going to see Scousers, hopefully – can you imagine a Scouser scoring in front of the Kop, again?”

As for certain starters, you can write Caoimhin Kelleher‘s name in a permanent marker – so long as no issues arise overnight.

It got somewhere lost in the ownership news on Monday, but the Reds were drawn against Real Madrid in the last 16 of the Champions League – with the ties to be played in February and March.

It comes swiftly after the final in May and the focus will not be on revenge but rather on creating new memories together.

“I don’t believe life should be like [revenge]. Two of the biggest clubs in the competition competing so early,” Lijnders said of the draw.

“We had a consistent run [in the group] and we are again in the knockout stages, we cannot wait to compete with them.

“The Anfield and European nights are special, the fans expect us to be in these games and let’s hope we can create new memories.”

‘We we will pay fans back’

The season to date has plenty of low moments within the highs of important victories and the support from fans has not gone unnoticed, with Lijnders vowing it will be repaid.

“I want to give a big compliment to the fans, and to our owners, because it’s arrogant to think football always goes in your direction,” Lijnders said.

“It’s arrogant to think that it always goes up, up and up. There will be difficult spells and difficult phases in the season for each club.

We’re sure that promise will be kept!

Lijnders’ book ‘Intensity’ was released on the eve of the new season and has been front and centre for critics, linking to Liverpool’s drop in form and being found out by the opposition.

It was put to the man himself, who has “no regrets” as he “enjoyed every word. The moment it was published, it was done, no interest. Because new season, new problems.”

He added: “I’m proud that there’s a book that gives inside information – not as much as people say!”

There you have it!

Investment into the team

You can safely say signings are the most discussed element of the game in the modern era, and Liverpool are no exception under an ownership group who act in a sustainable manner.

Everyone always wants more and Lijnders knows that “two, three, four or more players” is what everyone wants to see, but emphasises the club cannot afford to get their business wrong.

“I think we invested well, I think if you look to our last [few] years, we bring Luis Diaz in the winter – a massive signing and was needed, I said it was like water in the desert,” he said.

“Then you have Calvin [Ramsay], Fabio [Carvalho] – young players – before that, Konate, Jota – all are signings that hit the bullseye.