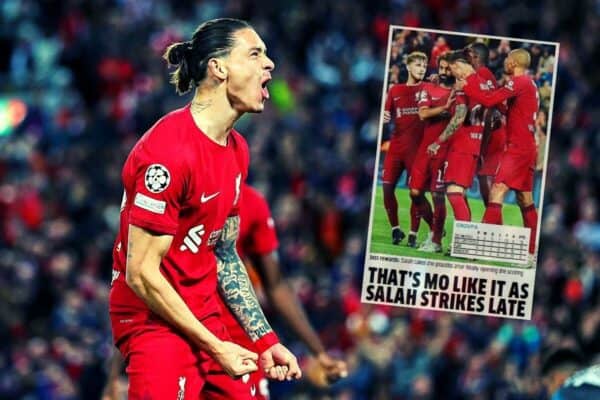 Liverpool showed quality and heart in their 2-0 victory at home to Napoli, with the watching media lauding their efforts.

The Reds were impressive against the Serie A leaders on Tuesday evening, more than matching arguably Europe’s most in-form team currently.

Mohamed Salah tapped home to give Jurgen Klopp‘s side the lead in the 85th minute and there was still time for Darwin Nunez to do the same in the final seconds.

Here’s how the media reacted to Liverpool’s win, on what was a positive night.

It was an admirable response after the defeat to Leeds…

Andy Hunter of the Guardian felt it was a win to cherish, both in terms of Salah’s exploits and for Jurgen Klopp‘s confidence:

“It was the Serie A leaders first defeat in any competition in 18 matches this season and a little slice of revenge for Liverpool’s mauling in Naples at the beginning of a transformed European campaign.

“Salah struck five minutes from time after substitute Darwin Núñez’s header had been saved on the line by Alex Meret.

“Luciano Spalletti’s side finished top of Group A courtesy of their 4-1 home win over Liverpool but for Klopp, taking charge of the Anfield club for the 400th time, victory number 249 was one to embrace given the doubts and the questions circling over his team’s form this season.”

Richard Jolly of the Independent hailed the manner in which Liverpool have responded from their defeat in Naples:

“And so a group that began with the seismic shock of their worst performance under Jurgen Klopp ended with a fifth straight win for Liverpool.

“They finished it level on points with Napoli, even if that tally can feel deceptive, so superior were Luciano Spalletti’s side in the Stadio Diego Armando Maradona.

“While they have lost to teams who kicked off in the bottom two places in the Premier League, Liverpool have beaten perhaps the two finest sides in Europe this season, in Manchester City and Napoli.”

Chris Bascombe of the Telegraph was in positive spirits, but insisted Liverpool can’t get carried away:

“Given Napoli’s pedigree it was a notable win in keeping with how strange this season is. Liverpool have been beaten by far worse sides in the last few weeks.

“Klopp has seen enough of these apparent turning points to assume this is more than a baby step in the right direction, but the Italians are the most accomplished visitors to Anfield since Manchester City.

“They suffered a similar fate – Salah benefiting from Nunez’s physicality for a win which means more for morale than qualification. Klopp will take everything he can given recent weeks.

“Klopp will have spent most of this Champions League fixture believing he was watching his team again.”

“When there has been justified talk of how Klopp failed to evolve his Liverpool team over the years you can have a large degree of sympathy for him, because three of the key players in that evolution have been largely absent this season.

“Luis Diaz and Diogo Jota are still out of course, and neither will be seen this side of the World Cup, but Ibrahima Konate returned here for the first time since the 7-1 win at Rangers and underlined why he will have a key part to play for Klopp going forward.

“The Frenchman had made himself Virgil van Dijk‘s first-choice partner by the back end of last season, but with injuries robbing him of a chance to do the same for this campaign, his commanding display here will be hugely welcomed by Klopp.”

“The vulnerability of Liverpool’s defence, not helped by a struggling midfield, has been one of the features of their disappointing start to the season but Ibrahima Konate showed what they have been missing as they confirmed a slot in the last 16 of the Champions League.

“The 23-year-old France defender returned against the formidable Napoli attack and gave an outstanding display as Liverpool looked a far more secure proposition than they have in recent times.

“True, Napoli were not at their most destructive and knew it would take something truly special from Liverpool to turn this group on its head, but the class demonstrated by Konate illustrated exactly why manager Jurgen Klopp will hope this talented young defender can now have an injury-free run for the rest of the season.”

Jolly focused on the record-breaking Salah, who continues to score goals at a relentless rate:

“This felt more of a dead rubber until Van Dijk and Salah, Liverpool’s two best players on the night, exerted a decisive impact.

“Salah has scored in both and his seventh goal in five European games makes him the Champions League’s top scorer.

“His own continental campaign began ignominiously and ineffectually in Naples but has improved dramatically since then.”

“Ibrahima Konate and Virgil van Dijk are very much at different stages in their Liverpool careers.

“For many, though, they represent the best combination at centre-back for the immediate future as the Reds look to navigate their way back towards some kind of defensive consistency.

“They were back together here at Anfield for the Champions League group finale against Napoli with the Reds still hurting from the defensive malaise that gifted victory to Leeds on Saturday evening to end their long unbeaten home Premier League run.

“The duo ended the previous campaign as arguably the first-choice duo having started the finals of the FA Cup and Champions League, and are undoubtedly unmatched in terms of physical presence.”

A few also touched upon another tweak in formation…

Posting on Twitter, David Lynch felt the switch back to a 4-3-3 system did the trick:

Think the return to 4-3-3 tonight was an admission from Klopp that a change of formation didn't fix things – Liverpool have to scrap to get back to their best. The only issue is how you fit Nunez in if Salah and Firmino start but, as you could see tonight, you definitely have to!

Finally, This Is Anfield‘s Mark Delgado also assessed the change by Klopp, stressing that it didn’t always work:

“Another game, another shape shift: Jurgen Klopp went back to the future for our midweek encounter, reverting to the 4-3-3 which served Liverpool so well for so long, and so poorly earlier this season.

“It was the third different ‘formation’ in the last four games.

“Once more there were clear midfield issues from early on with wide-open spaces causing problems for Napoli to pass through, and the full-backs being isolated defensively.

“It wasn’t an issue for Kostas, who could match Politano for pace, but Trent was left so exposed against one of Europe’s most in-form wingers that it looked like Khvicha Kvaratskhelia was going to score or set up a goal every time he got the ball.

“Perhaps this latest rotation was an element of who was fit and where they could best perform, quite as much as which system will get us winning again, but it’s now three formations in the space of four matches, following on from our 4-4-2 and shift to diamond.”