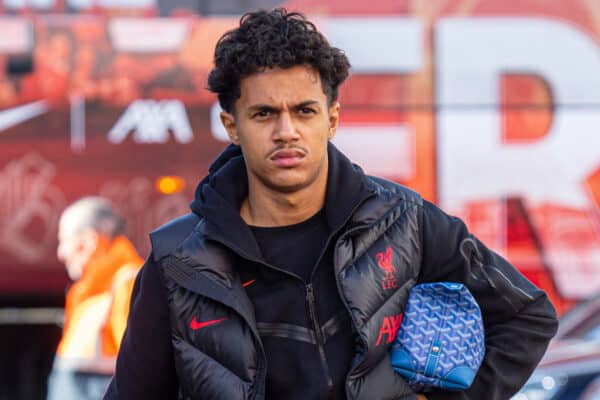 Portugal under-21s coach Rui Jorge has spoken of his disappointment at how Fabio Carvalho handled his withdrawal from contention this month.

Carvalho was among the 10 Liverpool players called up for international duty outside the World Cup this month, but it later emerged that he had pulled out.

The Portuguese Football Federation confirmed the news on Monday evening, ahead of their U21s friendlies against the Czech Republic and Japan, pointedly noting how he had done so via “some SMS messages.”

It was a shock development, with the Portuguese-born Carvalho having only made his debut at that level earlier this year, and it led to speculation over a switch back to England.

Either way, the manner in which the 20-year-old approached his exit left Jorge “disappointed,” as he told reporters on Thursday.

“I got disappointed by the way it went,” he is quoted by Mais Futebol.

“The fact that Fabio sent me a message, on Saturday night, saying that he didn’t want to continue in the under-21s.

“That he had been thinking and didn’t want to continue in the under-21s, because it no longer brought him any benefit.

“For now, it’s a message. My answer was: ‘So, Fabio, not even a phone call?’. And the disappointment was precisely there.

“After my message, I thought Fabio would pick up the phone, call me and speak. That’s what I always conveyed to them, that they could talk to me about these matters.

“I make a point of telling all players when they come with us. I only want people in this space who really want to be here.”

It is a strange situation, and though Carvalho has no obligation to represent Portugal or accept a call-up, the fact he has ruffled feathers is certainly not a good thing.

He is still a relatively inexperienced player, and the suggestion that U21s duty “no longer brought him any benefit” is a worrying one.

To his credit, though, Jorge did hail Carvalho’s attitude while with his Portugal squad previously, having played four times over two breaks in March and June.

“Fabio, it should be noted that, while he was with us, he always behaved exemplary at all levels,” he said.

“What he brought to our game too, his relationship with our staff was impeccable.

“On our part towards him the same thing – he was treated with affection and respect that we all deserve, everything went very well.”

However, Jorge added: “That’s why I was surprised.”