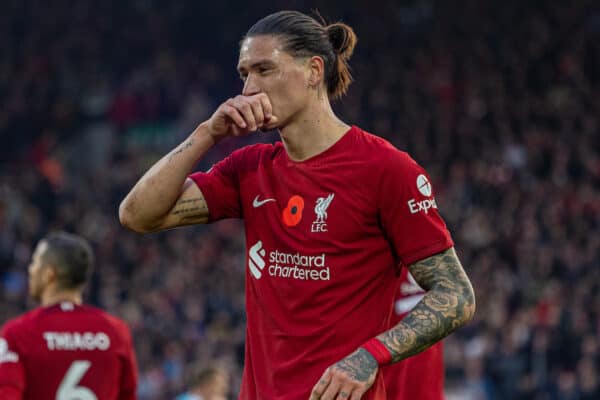 Darwin Nunez‘s start to life at Liverpool hasn’t been the most straightforward, but the stats behind his recent good form show he really is starting to fire for the Reds.

The Uruguayan signed off for the World Cup with an excellent brace in Liverpool’s 2-1 victory over Southampton last Saturday.

Those goals took Nunez up to nine goals in 10 starts for Jurgen Klopp‘s side this season, with seven in his last 10 games in all competitions.

Delve deeper into his recent performances and Nunez’s recent numbers show there is every chance the striker could be even more effective in the second half of the season.

Erling Haaland has been the Premier League striker on everyone’s lips, having already scored an impressive 23 goals in all competitions this season.

But a glance at his underlying numbers compared to Nunez’s show the Liverpool striker compares favourably to the Norwegian.

While Nunez has plenty to do to catch up with Haaland’s goal tally, these figures give Klopp and his coaching staff every reason to be very excited about what’s to come from the ex-Benfica forward.

A look at the players (who have played 500+ minutes) with the best mins-per-goal and assist ratios for Premier League clubs in all competitions this season also shows Nunez out in front with Haaland.

All of these numbers point towards plenty more goal contributions when Nunez has a settled starting role in Liverpool’s team.

Best mins-per-goal/assist for Premier League clubs in all comps this season (500+ mins):

A three-game ban in the early weeks of the season, fitness issues and Liverpool’s general struggle for form have not made his first few months at Anfield the easiest.

But the fact that, despite all this, he has racked up such impressive numbers, shows Liverpool really do have a special talent on their hands.