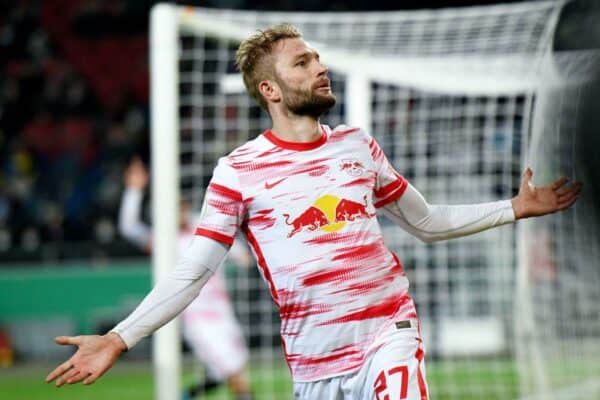 Liverpool have been touted with a move for RB Leipzig midfielder Konrad Laimer as early as this winter, but who is he and what could he bring in?

With injury problems plaguing a poor start to the campaign – at least in the Premier League – it is widely accepted that a new midfielder would benefit the Reds mid-season.

Deadline-day loan signing Arthur is out indefinitely having clocked just 13 minutes on the pitch before a serious injury, while Naby Keita is yet to feature since the Community Shield.

Alex Oxlade-Chamberlain, Curtis Jones, Thiago and Jordan Henderson have all spent time out, too, with Fabinho, James Milner and Harvey Elliott the only midfielders to make every matchday squad so far.

According to Sky Germany’s Florian Plettenberg, who appears to have received information from Jurgen Klopp‘s agent, the club have set their sights on a midfielder in the winter transfer window.

Laimer is under consideration, so what do we know about Leipzig’s No. 27?

Who is Konrad Laimer?

Born in Salzburg, Austria, the 25-year-old Laimer has come through the Red Bull system having signed with Salzburg as a youth player in 2007.

His senior career began with sister club FC Liefering in the second tier, before returning to Salzburg to establish himself as an important player over three successful seasons.

There, he played alongside Naby Keita, Sadio Mane, Takumi Minamino and Andre Wisdom, the latter on loan from Liverpool, before making the natural progression to Leipzig in 2017.

Now a key, first-choice starter at the Red Bull Arena, Laimer also made his Austria debut in 2019.

What is his style of play?

Laimer is a relentless pressing midfielder, who plays with a remarkable intensity as a vital cog within the hard-running Leipzig system.

Peter Zeidler, the player’s manager at both Liefering and, briefly, Salzburg, relished how he “always goes full throttle,” while ex-Salzburg boss Adi Hutter praised him as being “incredibly aggressive.”

One of Laimer’s former team-mates for Austria, Martin Hinteregger, praised him as a “sprint monster.”

The Austrian has been compared to N’Golo Kante in recent years, with his ability to suffocate the midfield battle, win possession back and shield the ball reminiscent of the Chelsea midfielder.

Statistical analysis from FBref compares Laimer to the likes of Thomas Lemar, Mahmoud Dahoud and Florian Neuhaus, who have all previously been cited as Liverpool targets.

His idol, though, was Steven Gerrard.

“The way he played football, the passion and the emotions,” he said in 2017. “That’s what I was always able to identify with.”

Are there any issues?

Yes, and it is a familiar one for Liverpool supporters.

Laimer is currently sidelined with an ankle ligament injury that required surgery in September, which is his second serious ankle problem in two years.

The midfielder is due back in December, which should allow him to regain fitness during the winter break before a return when the season resumes, but it could serve as a red flag for recruiters.

On the whole, though, Laimer’s fitness record is healthy.

Where would he fit in at Liverpool?

Laimer could fill a number of roles within Klopp’s setup at Liverpool, which would suit the flexible approach the manager has taken with his formations of late.

At Leipzig, the No. 27 typically operates in a two-man midfield, sharing duties both defensively and pushing forward as part of the attack, while he has also been used in a more deep-lying role.

He is able to play wider on the left or right, and has experience of standing in at right-back for Leipzig, too.

If he were to join, he would be capable of filling in for Fabinho – with cover desperately needed for the overworked Brazilian – but would arguably be best-suited in the right-sided No. 8 role that Jordan Henderson typically performs.

Can we expect an arrival in January?

There is clearly interest from Liverpool’s side, while it has been suggested in Germany that Laimer would be open to a move to Merseyside.

But they are unlikely to be his only suitor, with Bayern Munich among the other clubs linked, and by now the pathway from Leipzig to Bayern is well-trodden.

Laimer’s contract is due to expire next summer and, according to Plettenberg, he is more likely to leave Leipzig than extend his stay beyond the end of his existing deal.

No pre-contract agreement has been reached yet, and if Leipzig are to raise any money from his sale they would need to do so in the winter window.