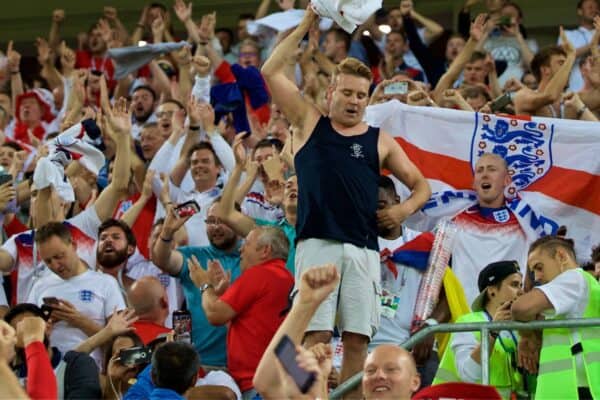 The World Cup is about to kick off in Qatar and, for many supporters across the country, it is a chance to get behind England. But less so for those from Liverpool…

For the first time in history, we embark on a winter World Cup.

A festival of football that FIFA expects will attract over five billion pairs of eyeballs, another chapter penned into the history of the sport on its greatest stage.

It presents another opportunity for England to put an end to a 56-year hoodoo and go one step further than they managed at last summer’s Euros.

To put it mildly, Liverpool Football Club and its supporters hold a complicated relationship with England.

The phrase ‘Scouse not English’ means different things to different people, from general ambivalence to an active desire to see them fail.

But the undeniably deep-rooted disconnect prevents a substantial section of our supporters from engaging with the country’s fortunes at major tournaments.

The intricacies of the situation and diverse opinions on the cause of indifference make it difficult to pinpoint a time period when Liverpool fans consciously chose to disassociate themselves.

There is, however, a discernible correlation between the political landscape in this country and the club’s number of captivated supporters at summer tournaments.

It is an establishment which has worked against the interests of the city for decades, and for many, the national team represents that.

The 1980s feel like the most appropriate place to start.

Prime minister Margaret Thatcher oversaw a deterioration of the city through a regime of funding and resource cuts, a policy which was corroborated in 2011 when papers were released detailing an intention to abandon the city and place it into a state of “managed decline.”

Support from the powers that be hasn’t improved much since.

The number of families in the city and its surrounding areas who are reliant on food banks is at a record high, and a reluctance from above to commit financial backing towards Liverpool has fuelled an inescapable sense of segregation.

When tribalism crosses the line

For others, the alienation stems more from tribalism.

As Liverpool supporters, we are subjected to weekly jibes trivialising hunger and poverty during a nationwide economic crisis and told that we murdered our own at Hillsborough despite an exhaustive three-decade-long inquest proving otherwise.

All from the same supporters we are expected to join hand-in-hand in cheering on a team that, in truth, we don’t particularly feel a part of.

It is not performative to push back against such behaviour, to rebel against what is otherwise a comprehensively united cause at major tournaments, we just simply haven’t got the energy for it.

The death of the Queen in early September caused unwelcome knock-on consequences for animosity on the terraces and on social media.

Attention turned to Liverpool’s Champions League tie at home to Ajax and faux outrage about the hypothetical booing of a minute’s silence.

The word ‘Hillsborough’ trended on Twitter within minutes of kickoff following a smattering of noise from a diluted minority.

A cynic might speculate that those tweets had already been drafted and that some had been hoping for disruptions in order to vindicate the smears they were already planning on retaliating with.

By no means is this a comparison of behaviours. There is no place for moral high ground in such circumstances and there are plenty of instances in which Liverpool fans have failed to cover themselves in glory.

But it dispels the notion that the slurs are exclusively tit for tat.

The booing of the anthem

It is not a new phenomenon, but Liverpool fans attracted controversy before the cup finals at Wembley and the Community Shield at the King Power for producing loud choruses of boos during the pre-match renditions of ‘God Save The Queen’.

Very few bothered to read up on why Liverpool supporters chose to vocalise their rejection of the monarchy and establishment, it was simply used as further ammunition to promote anti-Liverpool propaganda.

In the very same series of Wembley fixtures, a notable section of Man City supporters interrupted a minute’s silence for the Hillsborough anniversary with jeers and derogatory songs.

You’ll be shocked to learn that this didn’t receive anywhere near the same level of media scrutiny.

The establishment failed the Hillsborough families. That failure has allowed the portrayal of truth to be tampered with, forging pre-determined attitudes and hate-filled nonsense that is readily perpetuated to this day.

If there is any genuine desire to see patriotism across Liverpool, there aren’t many who can say they’ve made it easy.

There are other silly little bits and pieces, including the bizarre but almost unanimous booing of Joe Gomez from a home crowd at Wembley following a reported altercation with Raheem Sterling during training, later prompting an apology from the City winger.

Ultimately, however, this all has very little to do with the players on the pitch. In actual fact, they seem like a pretty likeable bunch.

The likes of James Maddison or Reece James aren’t responsible for abhorrent, incessant chanting and, allegiances aside, Marcus Rashford continues to embody everything that our football club and the city stand for.

The issue certainly doesn’t boil down to club rivalries like it may have done in years gone by, but football is about common ground among peers and feeling part of something bigger.

This all becomes increasingly difficult when basic principles don’t align.

Me? I’ll be a passive watcher from afar at best.

My interest in football was ignited by Michael Owen turning defences inside out at France ’98, but any enthusiasm for the national side has been on a downward trajectory ever since.

I have friends who will be cheering England on and I sincerely hope they have the winter of their lives.

There is no right or wrong way to do this and the opportunity to live a shared experience such as this one, away from the partisan nature of club football, doesn’t come around too often.

Whichever way you choose to spend this unique World Cup, be that as a fervent participant or somebody who is simply thankful for the rest, enjoy it for whatever it means to you.

You might not agree with the lack of patriotism from vast quarters and feel that the two needn’t be mutually exclusive, but an understanding from both sides is far more beneficial than the grim repercussions that spawn from the stalemate we have with rival fans currently.

As the manager himself said in response to the anthem being booed at Wembley: “They wouldn’t do it without a reason.”