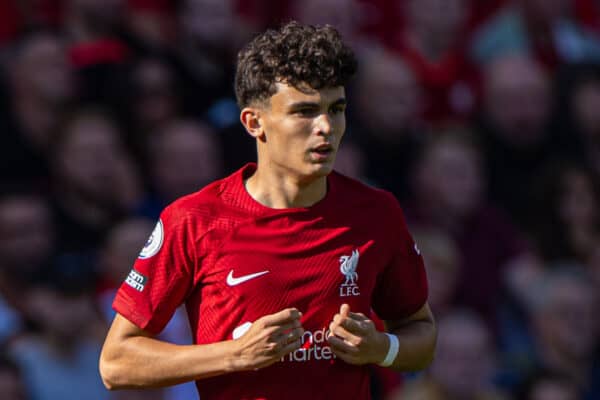 A strong Liverpool lineup will take to the field in Dubai this afternoon, as Jurgen Klopp calls upon many of his key players against French side Lyon.

The Reds kick off their mid-season friendlies today as they take on Lyon at the Al-Maktoum Stadium in Dubai, as part of their training camp.

Seven players are absent due to the World Cup, while others including Luis Diaz and Diogo Jota remain sidelined through long-term injury.

Caoimhin Kelleher starts in goal in place of Alisson, who is not expected back until the squad returns to Merseyside.

In front of the Irishman, James Milner starts at right-back, with Joel Matip and Joe Gomez the central pairing and Andy Robertson at left-back.

Stefan Bajcetic is set to start as the No. 6, flanked by Harvey Elliott and Thiago.

Klopp has already confirmed he “will use all the boys” throughout the friendlies against Lyon and AC Milan, and that includes the likes of Naby Keita, Alex Oxlade-Chamberlain and Calvin Ramsay on the bench.

Youngsters Ben Doak, Bobby Clark and Layton Stewart are also among those in reserve.