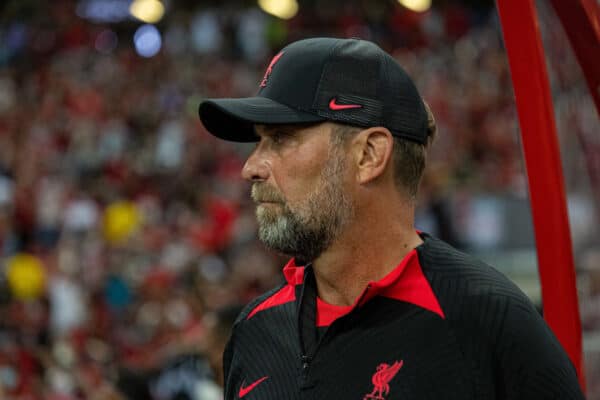 Liverpool return to action with a friendly against Lyon in the Dubai Super Cup on Sunday, with Jurgen Klopp saying he plans on using the vast majority of the players who are currently available to him in the game.

The Reds took a 33-man squad with them to the UAE at the start of the week. That number is now 32, with Luis Diaz flying home after a recurrence of his recent knee injury.

Diogo Jota and Arthur also remain sidelined, as do youngsters Marcelo Pitaluga and Kaide Gordon, while Curtis Jones is also an injury doubt having not trained fully since arriving in Dubai.

Joel Matip and Naby Keita, who were absent prior to the break, could be in contention for some minutes, with Klopp aiming to use most, if not all, of the players who are currently fit against the Ligue 1 outfit.

Darwin Nunez, whose Uruguay side failed to make it past the World Cup group stages, is scheduled to meet up with the Liverpool squad early next week.

“We will use all the boys pretty much we have here and the boys who are available,” Klopp told LFCTV when asked about his team selection plans for Lyon.

It’s quite possible that the boss names two different XIs in each half, as is customary for a regular pre-season match immediately after returning.

“The first one who will join us from the World Cup will be Darwin,” said the boss looking further ahead. “And then we will see who is available for the second and then we go home, and a few days later we play Manchester City. So, [it is] exciting.”

The Liverpool boss was also asked about the format of the Dubai Super Cup, a four-team tournament consisting of the Reds, Lyon, AC Milan and Arsenal.

Each team will play twice, with Liverpool not facing Arsenal, meaning there is a unique points-scoring system. Teams are awarded three points for a win and two for a draw.

“I don’t need it for the Premier League!” Klopp said when asked about the mandatory penalty shootout.

“And if you don’t play all the games, how can we find, in the end, a winner as well? So it helps if you give four points instead of three. I think it’s a nice idea and now we give it a try.”

Arsenal are actually playing two games in this competition then a further friendly against Juventus, but they don’t have Carabao Cup action.

The Gunners beat Lyon 3-0 (and on penalties) in the opening fixture.

“[On Thursday] because of our meetings, we couldn’t see the full game,” said Klopp. “I saw the last 25 minutes a little bit and will have a further look. Arsenal, what I’ve heard, were really good in that game. And now we will have our start on Sunday and it’s good.”

Liverpool will remain in Dubai until next weekend, rounding off the trip with their second Dubai Super Cup clash against AC Milan next Friday.