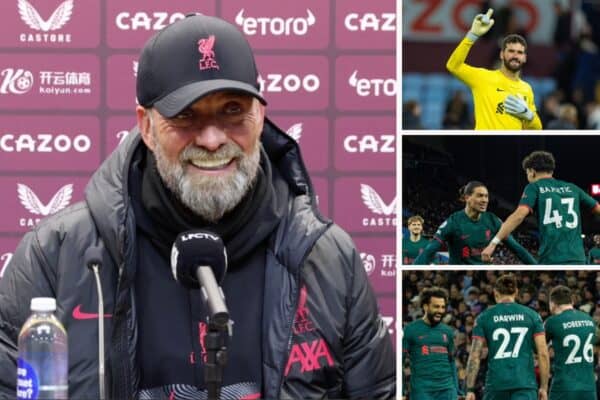 Here are four key points from the manager after the Boxing Day win:

The spotlight is firmly on Darwin Nunez, the chances he has without scoring but also the chaos he causes any defence.

There’s plenty to improve but Klopp is “calm” about the situation, it’s not his first time working with a striker.

“It’s different things, we are human beings,” he said of Nunez.

“I’m not only since yesterday in the business and I’ve had some strikers around and the scoring, in the beginning, is really not important.

“There are so many other things that are more important. You just have to stay calm.

“The work rate he put in, the depth he creates for us, he is unstoppable in the moment when we pass the ball (in behind). He played an exceptional game.”

Liverpool’s start to the season has made the bid for the top four a challenging one and while nothing is a certainty, Klopp and co are ready to fight.

And the Reds’ three points drag them that little bit closer to their goal.

“We don’t think we have, not at all because all the teams up there played an exceptional season,” he said.

“But as long as we can see them, we will fight for getting them.”

By setting up Mohamed Salah for the first goal, Andy Robertson set a new record for Premier League assists by a defender with 54, “crazy” and “really special” says Klopp.

“He’s a great guy and your colleagues told me now, but what came first in my mind was the guy we bought from Hull,” the manager reflected.

“We knew he was an exceptional talent, but personality and character make you the player you can be and he obviously had a good basis for that.

“I remember when he came into my office after half a year because he didn’t play a lot…now he is obviously a proper defender and still sets up goals.”

From Hull to a player who has won everything with Liverpool. And the journey is far from over.

All “is fine” with Trent

Trent Alexander-Arnold was back in the starting lineup after missing the game at City due to illness, which is also why he was withdrawn late on on Monday.

While the right-back played a very small role for England at the World Cup, Klopp says all “is fine” with Trent.

“With Trent, everything is fine. I don’t think he expected to make all games at the World Cup with all the players Gareth has available,” Klopp said.

“He contributed as good as he could.

“He didn’t like not playing but he was not especially down. He came back and got ill, so was hard today.”