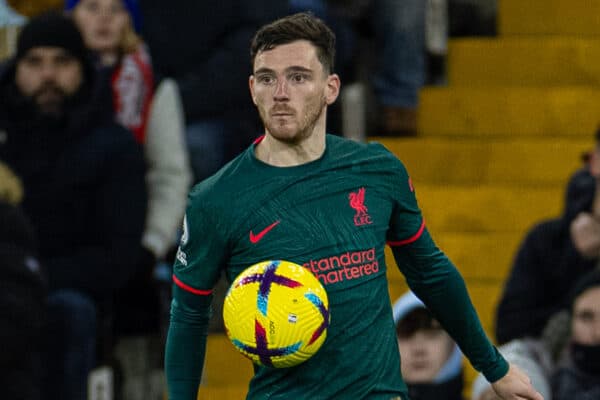 By notching an assist at Aston Villa, Andy Robertson is now on the top of an all-time Premier League chart having overtaken Leighton Baines for the honour.

The Scot has been at the heart of Liverpool’s creative hub under Jurgen Klopp, racking up 60 assists in all competitions.

A total of 50 have come in the Premier League, with his latest brilliantly setting up Mohamed Salah for the opening goal in the 3-1 win at Aston Villa.

And when you add the four assists he racked up while with Hull, Robertson now has 54 assists in the English top flight, more than any other defender in the history of the competition.

Everton‘s Baines held the Premier League record for a defender with 53, a tally Robertson equalled in the final game before the World Cup break.

Although Ashley Young (71) sits at the top of the official chart, he has spent the majority of his career as a winger and is, therefore, discounted.

54 – Andrew Robertson now has the outright most assists of any defender in Premier League history (54), overtaking Leighton Baines (53). Wand. pic.twitter.com/75KJ5xYlB2

“First and foremost I want to defend, but I knew I equalled it [the record] before the break and I wanted to try and break it after,” Robertson told Amazon Prime.

“It’s always nice to put yourself at the top.”

Robertson has eight assists so far this season, eight more than Trent Alexander-Arnold who has, remarkably, yet to get off the mark in 2022/23.

But the left-back does have the No. 66 to thank for his record-breaking assist at Villa, with Alexander-Arnold having served up a sumptuous pass into his feet to then set up Salah.

It is the Egyptian who Robertson leads in the assists charts this season, Salah has racked up six, with Kostas Tsimikas and Diogo Jota close behind on five.

Robertson’s best assist haul in one season for Liverpool came in 2021/22 after setting up his teammates 15 different times – and he’s already more than halfway to matching that haul.