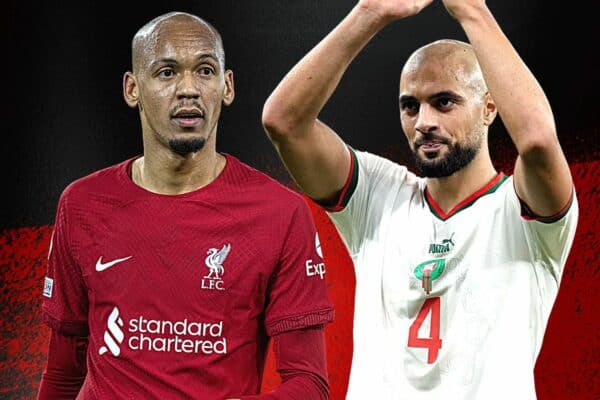 Sofyan Amrabat is one of a host of midfielders who continue to be linked with a move to Liverpool, but if the Reds are interested, how would he fit into Jurgen Klopp‘s side?

The Morocco international was many people’s standout midfielder at the World Cup, playing an integral part in his nations’ historic journey to the semi-finals in Qatar.

With Liverpool in need of reinforcements for their midfield in 2023, Amrabat, who plays his club football in Italy with Fiorentina, is said to be attracting interest from the Reds.

Earlier this month, Sky Germany‘s Florian Plettenberg claimed there had been talks, with the 26-year-old keen to make “the next step” in his career by next summer at the latest.

Other reports from France and Morocco have even suggested Klopp met with the player’s camp prior to the World Cup, with more negotiations said to be on the horizon.

So, why may Amrabat be a player who has attracted Liverpool’s attention and, if he were to join, where would he fit in, given the ongoing links to the likes of Jude Bellingham and Enzo Fernandez?

For more insight on Amrabat, This Is Anfield spoke to Benjamin Hajji (@BenjaHajji) of Transfermarkt (@Transfermarkt) & Maghrib Foot (@MaghribFoot).

Sofyan has had a strange journey with Fiorentina. He arrived from Hellas Verona, where he had impressed under Ivan Juric in a 3-4-2-1 formation, as one of two holding midfielders.

Then, he had to adapt to Cesare Prandelli’s 3-5-2 as one of three midfielders, which made him see less of the ball, while playing for a team which were struggling at the time.

He started off alright, especially impressing against the top clubs, where his ball-winning abilities really came to light. In the 3-0 win away to Juventus, he was outstanding.

Then came a few issues with injuries and card suspensions, which eventually saw him lose his regular spot under both Giuseppe Iachini and Vincenzo Italiano, where they shifted to a 4-3-3 and preferred Lucas Torreira in the No. 6 role.

Even this season he has started five out of their 15 league matches on the bench, despite the departure of Torreira.

But what has made Amrabat stand out at club level this season has been his performances against the top clubs in Serie A, where he was immense in matches against Juve, Napoli, Inter and AC Milan this season.

He thrives when his team is being put under pressure. He reads the game well, has the stamina and strength to cover a lot of ground and shrug opponents off the ball, and very rarely loses a 50-50 challenge.

The attention he’s been getting while at Fiorentina is more due to displays in selected games than his performance level over time.

How highly do you rate him? Good enough to play for one of Europe’s top clubs?

As a Moroccan, I rate him very highly. He has been the most consistent player for the Atlas Lions ever since Vahid Halilhodzic took over back in 2019.

He is an invaluable presence for a side which has been desperately asking for someone to stabilise the midfield.

I do believe he has the skill set to make it at a higher level, but I am not sure if one of the top five or 10 clubs in Europe would suit him, mostly due to his lack of athleticism, which I think is required to play for a team that looks to dominate most games.

Although he has improved that part of his game, I find him a bit too slow on the ball, often taking four or five touches to turn and switch the play.

I’d also be curious to see how he’d fare in the Premier League, where the intensity of the game is different to Italy.

What do you make of the Liverpool links? Where do you think he’d fit into Klopp’s team?

I must admit, I didn’t believe the rumours when they first surfaced, simply because I couldn’t fathom Liverpool envisioning Amrabat in their team.

I assume they would see him in a Fabinho-esque role as a No. 6 in a 4-3-3 which, in fairness, suits him more than playing in a double pivot.

As a lone No. 6 he is able to effectively protect the right space between the defence and midfield.

Playing him as a No. 8 or No. 10, as I’ve seen some suggest, would be a waste of his strengths. There are a lot of better options out there for those roles.

At 26, he should still have five or six years at the highest level in him. His brother, Nordin, played his best football for Morocco at the age of 30, 31, so there’s nothing to suggest Sofyan is on his way down any time soon.

If anything, his age might be an advantage for Liverpool, combining his experience with younger talents.

Liverpool are being linked with big-money moves for Jude Bellingham & Enzo Fernandez, do you think a move for a cheaper option like Amrabat would be shrewd business?

I don’t think Amrabat should be compared to either of the two.

He’s more of an out-and-out midfield anchor, while Bellingham and Fernandez are both more dynamic, technically gifted and with more attacking qualities.

If they sign Amrabat, they should expect nothing more than a no-nonsense defensive midfielder who will do his job, but he’s certainly not a jack-of-all-trades.

Personally, I can’t imagine Liverpool signing Amrabat as a projected starter, but perhaps as an alternative, especially in matches where they expect a real battle in midfield and opponents are either very dangerous on counter-attacks or aim to dominate possession, where Amrabat’s ball-winning abilities can shine.

What sort of fee do you think Fiorentina would want for him?

When he was linked to Spurs last season, the reported fee was about €25 million. I imagine that has now doubled, so somewhere around €50 million seems realistic.

• Check out our Q&A with Argentinian football expert Dan Edwards, who explains why reported Liverpool target Enzo Fernandez should be viewed on the same level as Jude Bellingham.