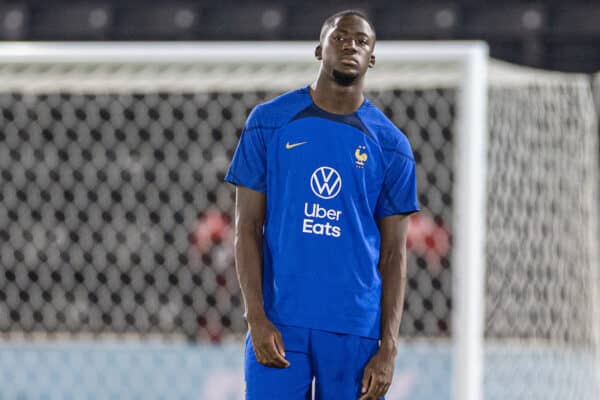 After fears he could miss the World Cup final due to a virus sweeping the France squad, Ibrahima Konate has now been given a boost to his chances.

As France prepare to take on Argentina for the title of world champions on Sunday, a virus has plagued Dider Deschamps’ preparations.

Dayot Upamecano and Adrien Rabiot were both forced out of the side for the 2-0 win over Morocco in the semi-finals, along with Kingsley Coman.

Then, on Friday, it was reported that Konate, who took advantage of Upamecano’s absence with a top-level display against Morocco, had joined Raphael Varane in showing symptoms.

Konate, Varane and Coman were all kept away from the squad to avoid any further spread, which led to concerns over their involvement in the final.

However, according to French newspaper L’Equipe, both Konate and Varane were given the green light to return to the group on Saturday.

Whether they will be passed fit to start remains to be seen, but there is now at least a chance that Deschamps can call upon the pair against Argentina.

It remains to be seen if Konate would be preferred to Upamecano if both were fit, though it is clear that Liverpool’s No. 5 has outperformed his former RB Leipzig team-mate at the tournament so far.

No player has averaged more successful tackles and interceptions per 90 than Konate (6.9), who is behind only Aurelien Tchouameni (93.2%) as France’s most accurate passer (91.8%).

Either way, involvement in Qatar will almost certainly rule the 23-year-old out of at least two games for Liverpool, who play Man City (Dec 22) and Aston Villa (Dec 26) next week.

Konate will be given a week off after the final before rejoining training on Merseyside, which would see him return on the day of the Villa game.

There is a chance he could be reintegrated during the clash with Leicester on December 30, with an increased role at Brentford on January 2.