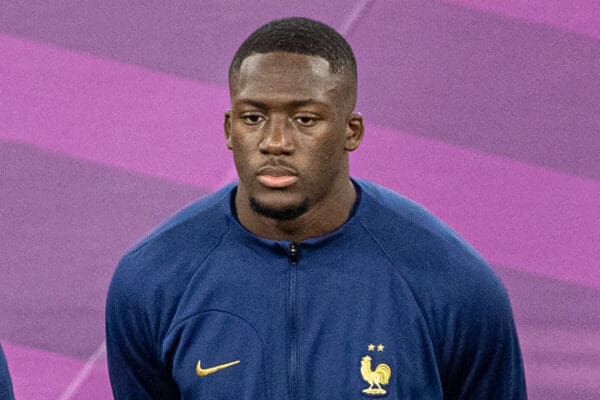 Ibrahima Konate in doubt for World Cup final with illness

A virus continues to spread through the France camp in Qatar, with Ibrahima Konate one of the latest reported to have succumbed, just days out from the World Cup final.

Konate is the last Red standing at the tournament after he helped France secure their place in Sunday’s showpiece with a dominant performance in their 2-0 win over Morroco on Wednesday.

It was Konate’s fourth appearance having been turned to by Didier Deschamps after his former RB Leipzig team-mate Dayot Upamecano fell ill ahead of the semi-final.

That same illness has now put Konate’s place in Sunday’s final in jeopardy, with various reporters, including the Telegraph‘s Jason Burt, revealing the Frenchman is the latest to catch the virus.

Fellow French centre-back Raphael Varane is also affected, with the pair missing training on Friday, but Liverpool’s No. 5 is said to “be more ill than Varane.”

Adrien Rabiot and Kingsley Coman have also both been ill and with the virus continuing to spread, France have introduced social distancing measures.

Players who have had symptoms have been isolated from their teammates, but it is said that “Deschamps is confident they will be available for the final against Argentina.”

With the final in two days’ time, there is a chance more players could succumb to what is being described as a “flu-like illness,” late drama France could no doubt do without.

It would be a huge blow for Konate should he be forced to miss out on the biggest game on the international stage due to illness, with a starting place well within his grasp.

The 23-year-old has attracted plenty of praise for his performances in Qatar, displaying the quality Liverpool supporters have long eulogised over since he landed at Anfield in 2021.

With the opportunity to become a world champion only days away, here’s hoping Ibou can play his part.