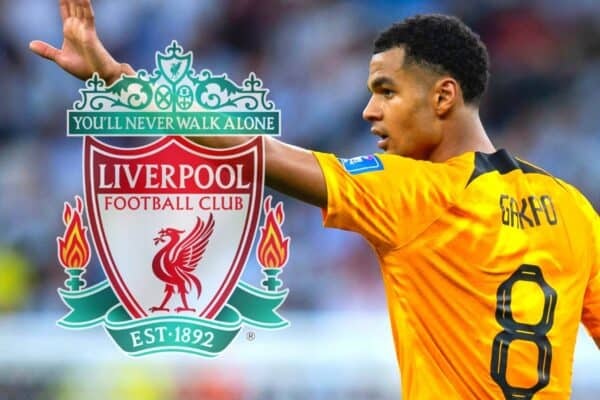 News emerged of Liverpool’s interest in Gakpo following the victory over Aston Villa, and within an hour, the Eredivisie outfit had made the move official.

Liverpool are yet to officially comment, and it may be that they will wait until Gakpo undergoes his medical and the move is completed in the coming days.

That, however, did not stop goalkeeping coach John Achterberg from welcoming his fellow countryman Gakpo to Liverpool on Instagram.

The 23-year-old is to become the second first-team Dutch player in the current Liverpool squad, with his national team captain Virgil van Dijk said to have spoken to him about the move.

Before news broke of the Gakpo deal, Van Dijk hinted that new arrivals could be imminent after the win at Villa, claiming he hoped Liverpool could “welcome some new players at our football club” [in January] and that “quality is always welcome.”

Liverpool’s No. 4 spoke in glowing terms of Gakpo at the World Cup, saying he hoped the forward “could go to the moon and back” with his career and claiming he “has so much potential.”

Aside from his eye-catching performances at the World Cup, Gakpo has racked up an impressive 30 goal involvements in just 24 appearances at club level this season.

Alisson was among the Liverpool players to follow Gakpo on Instagram on Monday evening, with Stefan Bajcetic also following suit.

Tuesday marks five years since Liverpool announced Van Dijk’s arrival with an image of him holding up the club’s shirt by a Christmas tree, with fans now hoping for a similar announcement for Gakpo in the near future!