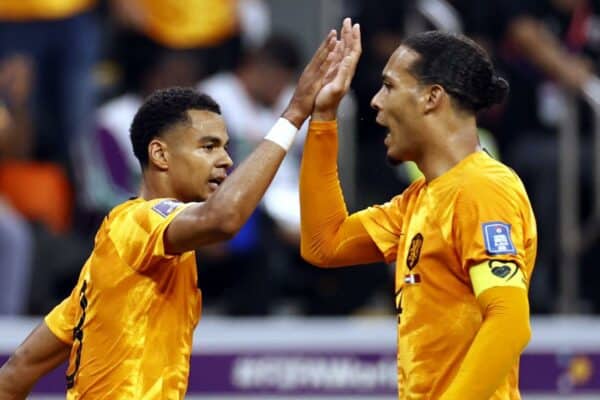 “To the moon and back!” – What Virgil van Dijk has said about Cody Gakpo

PSV Eindhoven have confirmed the exit of star attacker Cody Gakpo to Liverpool and Virgil van Dijk‘s recent comments suggest the Reds are signing a gem.

No sooner had the dust settled after the 3-1 win at Aston Villa on Boxing Day that huge transfer news emerged from nowhere.

In the space of roughly an hour, Liverpool went from being strongly linked with a move for Gakpo to a potential £40 million deal being confirmed by PSV.

The 23-year-old looks like a hugely exciting signing by the Reds, not only racking up 13 goals and 14 assists for PSV this season, but also scoring three times at the 2022 World Cup for the Netherlands.

Gakpo’s captain in Qatar was Van Dijk, and speaking during the tournament, the Liverpool legend waxed lyrical about his international teammate.

“Hopefully Cody can go to the moon and back,” said Van Dijk. “He is a very good player and a good boy too.

“What we see in training is what you see on the pitch. There is still so much potential and I hope he can carry on showing it for us. We are very happy with him.”

Whether or not Van Dijk knew about a potential move to Liverpool for Gakpo at that point remains to be seen, but it is encouraging to hear him give such rave reviews.

Also during the World Cup, Van Dijk threw shade at his colleague’s potential move to United, suggesting that he had a bigger “next step” in him.

Van Dijk was asked about the prospect of his team-mate joining either Real Madrid or Man United, repling: “Are Manchester United and Real Madrid on the same level at this moment? No disrespect, not at all.

“I think he definitely has a next step in him. I definitely feel like it could happen. Whether it happens in the winter or next year, time will tell.

“But he’s a great boy, works hard, is very talented and there’s definitely more in him.

“We are very pleased he’s doing so well and long may it continue.”

Speaking more recently though, literally moments before the news of a deal broke, Van Dijk surely did know of the move, telling reporters after the win at Villa that he hoped “we can welcome some new players at our football club” [in January] and that “quality is always welcome.”

It would be no surprise at all if Van Dijk has had a huge influence in Gakpo opting to join Liverpool over some of their rivals, having no doubt sold the idea of the Reds to him.

At 23, the PSV talisman has the potential to be the next attacking Anfield hero, capable of wreaking havoc both out wide and in central attacking areas.

With Luis Diaz out for the foreseeable future, that left-hand side was in need of reinforcements and Gakpo will hopefully plug that gap to perfection.