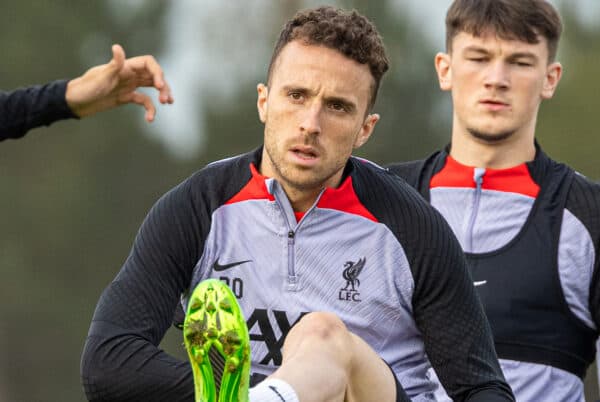 After Luis Diaz suffered a recurrence of the knee injury he sustained against Arsenal earlier this season, Liverpool will hope to have Diogo Jota back to full fitness sooner rather than later.

Having initially returned to full training earlier this week, Diaz was expected to be ready to make his return ahead of Liverpool’s busy festive schedule.

On Friday, however, it was revealed that Diaz had suffered a setback and would be leaving the Reds’ warm-weather training camp in Dubai.

While the club have so far remained tight-lipped on the severity of the problem, reports in Colombia state Diaz is set to undergo surgery, with the club not expecting him to return until March.

Jota, meanwhile, has been sidelined since picking up a serious calf injury against Man City in October, a problem that led to him missing the World Cup.

The forward is part of the 32-man Liverpool squad in Dubai, but is still a way off fitness, working on his recovery alongside the Reds’ fitness coaches in the UAE.

Do we know when Jota could be back in action?

The most recent update we’ve had on his fitness came from The Athletic’s James Pearce earlier this week, who states he is “unlikely to be back playing until February.”

In the weeks leading up to the mid-season break for the World Cup, Mohamed Salah, Roberto Firmino and Darwin Nunez were the only senior forwards available for selection.

And with Diaz set to spend longer in the treatment room and Jota seemingly still several weeks away from fitness, that looks set to remain the case when Liverpool return to competitive action later this month.

Diaz and Jota are, of course, Liverpool’s main options for the left-side of their attack, with Klopp using a number of players in that role throughout October and November.

Nunez was beginning to look increasingly comfortable in that position prior to the World Cup, scoring a brace against Southampton in the Reds’ final match before the tournament.

Even Klopp, though, would admit that Nunez is more suited to a more central role, with the Reds perhaps in need of another left-sided option.

Could this impact Liverpool’s plans for the January window?

Making signings midway through a season is never straightforward, but the Reds have shown in recent years that they are open to adding players should the right deal present itself, just as they were when they secured Diaz’s signature at the beginning of the year.

Much of the recent transfer speculation surrounding the Reds has centred around some new additions in midfield, but regardless of Diaz and Jota’s fitness, you could argue that Liverpool will require another forward option at some point next season, with Roberto Firmino‘s contract talks also a factor.

Should Diaz be sidelined until March, he could miss up to 17 matches for the Reds, including the first leg of their Champions League encounter against Real Madrid.

Who else is still injured?

There’s been no update on Curtis Jones‘ fitness from the club, but the 21-year-old looks to be working his way back from an injury problem himself, having yet to take part in a full training session in Dubai.

Arthur also remains out, as do youngsters Marcelo Pitaluga and Kaide Gordon, but Joel Matip and Naby Keita have been pictured in training this week, having been sidelined before the World Cup.

Nunez is to reconvene with the Liverpool squad at the start of next week, while those whose teams were eliminated from the World Cup this weekend will now be granted a week off, but should be ready to play a part when Liverpool return to competitive action later this month.