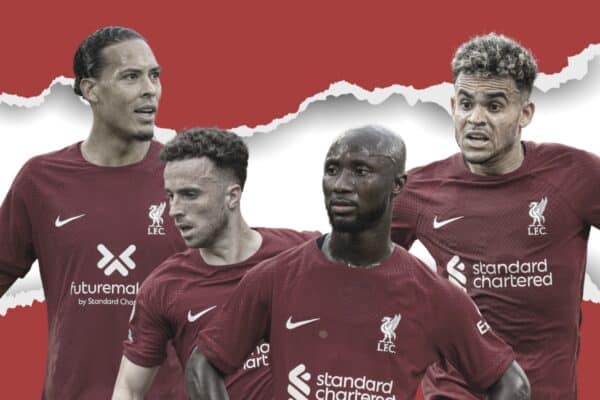 With Virgil van Dijk the latest Liverpool player to succumb to injury, it means only six Reds have yet to miss a game due to a fitness issue in 2022/23.

When it rains, it pours for Liverpool as Van Dijk’s hamstring injury clearly demonstrates, his first, and hopefully last, setback of the season.

What it means is that Van Dijk is now to become the 21st Red to miss a match due to injury this season – and only 26 games have been played.

Only six have avoided succumbing to a similar fate, they are, Adrian, Joe Gomez, Nat Phillips, Fabinho, Harvey Elliott and Mohamed Salah.

In total, 20 players have missed a combined 159 games this season thanks to injury, a tally that is only rising thanks to continued absences and new issues arising.

It’s proven a hard cycle to break for Liverpool, with the demands only increasing for those who have remained fit and thus pushing them closer to breaking point with each passing game.

Naby Keita has missed the most games due to injury this season with 19, but he will soon be surpassed by Diogo Jota (18) thanks to his serious calf injury which is only set to see him return in February.

Luis Diaz is not far behind either with 14 games missed thanks to successive knee injuries.

The good news is that Curtis Jones made a return at Brentford and both James Milner and Roberto Firmino are expected to be in contention for Saturday’s FA Cup clash against Wolves.

The club have been without an official club doctor since Jim Moxon left for Man United before this season got underway – two academy staff doctors have since been fulfilling the role.