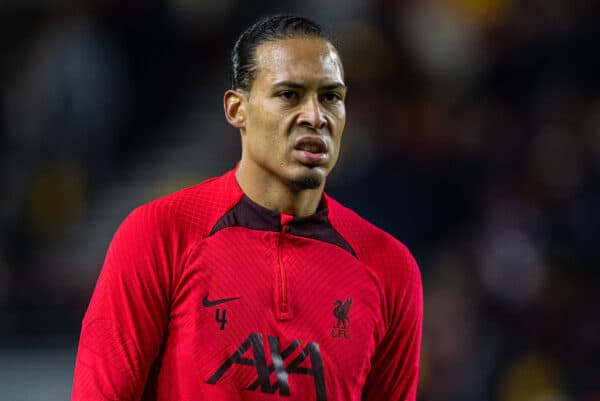 Liverpool are set to be without Virgil van Dijk for an extended period, with the centre-back’s hamstring injury described as “worse that first feared.”

Both Van Dijk and Jurgen Klopp were optimistic when he was initially forced off in the 3-1 defeat to Brentford on Monday night.

Speaking in his post-match press conference, the manager said: “[He] said he is fine, and he’s a very good judge of these kind of things…I think it is not an injury.”

But it has now been reported that Van Dijk is facing time out, with the Times‘ Paul Joyce relaying word from the club on Wednesday morning.

Joyce describes the situation as “worse than first feared,” while The Athletic‘s James Pearce explains that the player is “set to see a specialist today to establish the extent of the injury.”

No timescale has been placed on the Dutchman’s recovery yet, but he is now set to miss the clashes with Wolves and Brighton at the very least.

It seems possible that Van Dijk will now be absent for a lengthy period, which is a big blow to Liverpool who will be without a player who had been ever-present in the Premier League and Champions League.

In his absence Joel Matip is the most probable partner for Ibrahima Konate, but the pair have both suffered injury issues themselves this season.

Joe Gomez is the alternative, while this setback will almost certainly rule out a January move for Nat Phillips, who was already denied potential transfers to Bournemouth, Southampton and Benfica in the summer.

Prior to Monday, when he was substituted at half-time, no Liverpool player had clocked more minutes on the pitch this season than Van Dijk.