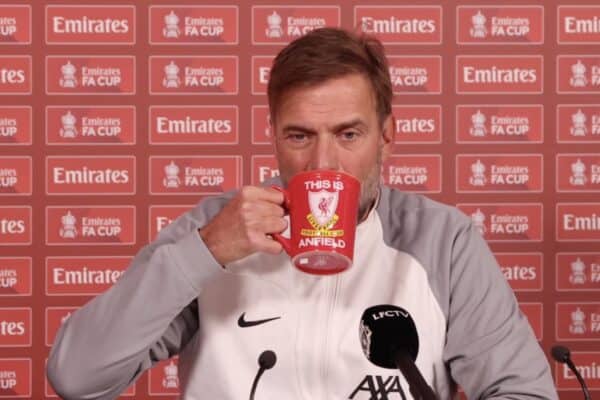 Jurgen Klopp has had discussions with Liverpool’s owners regarding the search for investment but the manager is keeping his lips shut on those particular talks.

Fenway Sports Group signalled their intention to explore a sale of the club late last year, with a minority stake or full sale both possible.

The sense is a minority investment is the likelier route and while there has been global interest, nothing actionable in regard to a formal bid has been submitted.

Although, on Sunday, the Telegraph‘s Sam Wallace reported that one is “expected next month” but failed to hint at who or where the bid is to come from.

And Klopp told reporters on Monday that “yes” he has been speaking with Liverpool’s owners since news broke of their wish to find new investment, “but nothing for you actually [to know].”

“I was thinking about what I could tell you about that, ehh, nothing,” Klopp said with a grin.

There have been interested suitors from Saudi Arabia, Germany, the United States and Qatar, and it’s the latter that has sparked social media into life over the last 24 hours.

Speculation is that a deal is in the works in Qatar and as is often the case online, it has quickly escalated into ITKs (in the know) using the handshake and eyes emojis.

Various outlets in Qatar have not even whispered a word of it and while it is a possible avenue, a reliable and credible source has yet to back up the online speculation.

As for investment from the current owners, Klopp remained steadfast in the view he has always had that, “if the solutions would be out there, available and doable, then, of course, we would bring players in to help.”