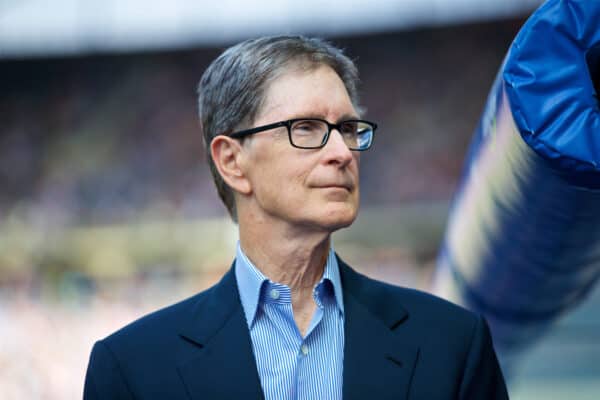 Two months have passed since FSG’s intentions to explore a sale of Liverpool broke and a report has now claimed that a “formal bid” is expected next month.

After more than 12 years as owners and custodians of Liverpool, FSG are open to investment in Liverpool, either as a minority stake or a full sale.

The preference is reportedly for the former which would allow FSG to retain control of the club, but no concrete offers have yet been forthcoming despite global interest.

But according to the Telegraph‘s Sam Wallace, a “formal bid” is “expected next month,” a line written in reference to both the sale of Liverpool and Man United.

Wallace states that the “auction for Manchester United and Liverpool is in full swing,” but these are the only references of the club in the article, one that focuses on Tottenham and Daniel Levy’s position in a changing landscape of football finances.

There is no hint at who the ‘formal bid’ is to come from and the statement is ambiguous, to say the least, it leaves plenty of room for future interpretation.

Earlier this week, the Echo reported that talks over investment have yet to develop into “real” negotiations,” with “no high-level talks” having been conducted since FSG made their intentions for the club known.

There have been interested suitors from Saudi Arabia, Qatar, Germany and the United States, the latter could prove the likelier avenue if a minor stake is a path FSG choose to take.

As for a full sale, FSG value the club in excess of £3 billion, ten times the amount they paid for the club in 2010.

The football landscape is shifting dramatically and not in the direction FSG had initially hoped it would when they bought the club and it’s no secret fresh investment is required to keep up.

Whether this ‘formal bid’ comes to fruition next month remains to be seen but in the meantime, Liverpool’s woes on the pitch are only further highlighting the gulf that FSG cannot bridge alone at Anfield.